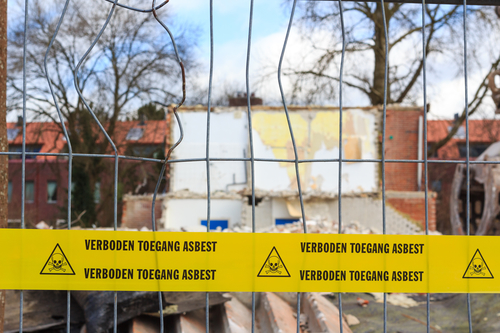 ‘No trespassing asbestos’ at a demolition site. Photo: Depositphotos.com

The Netherlands has become the 11th EU country to sign the European Trade Union Confederation’s ‘zero death at work manifesto’.

The manifesto, launched last April, calls on the EU and member states to take action to realise the goal of zero at-work deaths by 2030. The manifesto includes at-work accidents, exposure to hazardous substances in the workplace, as well as occupational stress related to heart disease, stroke, depression, and suicide.

For example, the ETUC estimates that in the EU, 12 workers die daily in the workplace and over 100,000 workers die annually as a result of working with carcinogenic substances.

In the Netherlands alone, there are an estimated 3,000 deaths annually from working with cancer-causing substances.

The signing by social affairs minister Karien van Gennip at the end of last year coincided with a number of controversies related to working conditions in the Netherlands, several of which involve state owned companies.

Television current affairs show Zembla highlighted that fact that workers on the tarmac at Schiphol airport had dramatically heightened risks of heart disease and lung cancer as a result of exhaust fumes and other carcinogenic pollutants. Zembla underscored that KLM and Schiphol were aware of this already 15 years ago.

In addition, ProRail was found to be violating labour agreements for railway workers because of their failure to choose non-carcinogenic rocks to weigh down the rails, despite these being available on the market. ProRail has since gone to court to fight the ban on these carcinogenic rocks.

Other high profile cases include the use of highly toxic chromium 6 paint by the defence ministry and railway workers.

The manifesto aims to step up action by member states, the European Commission, and the European parliament, to ensure zero at work deaths by 2030.

However, it is yet to be seen how Dutch government aims to implement changes as the concrete implementation strategies have not been made public.

The government is, however, setting up a special fund for people who have developed conditions including lung cancer caused by exposure to asbestos and chronic painters’ disease and Van Gennip said last year the government planned to extend the scheme to other work-based illnesses ‘once it is clear that it is responsible to do so.’