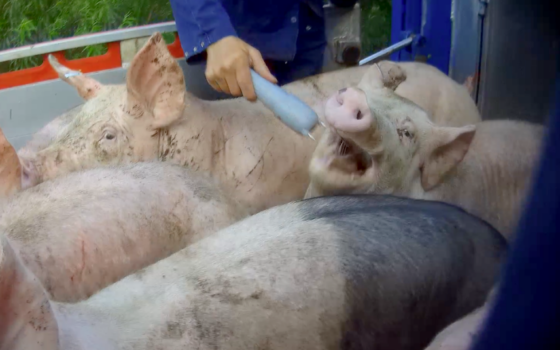 A still from the video. Photo: Varkens in Nood

The Dutch product safety board NVWA has started a criminal investigation following the publication of undercover footage showing pigs being blasted with 5,000 volts of electric shocks via a cattle prod as they are transported.

The shocks, given to get the pigs moving, are administered to the livestock on their backs and heads, a practice is prohibited under EU rules. The undercover almost 3-minute video shows the pigs squealing as they are continuously given electric shocks.

Tasers may only be used on adult animals in exceptional situations and not repeatedly. Even then, the animals must have sufficient space to move and the shocks can only be administered to the muscles on their hind legs

Animal charity Varkens in Nood, which published the footage, has started a petition to ban livestock tasers, which it says cause panic among the terrified animals. ‘This kind of news keeps coming out,’ Frederieke Schouten of Varkens in Nood told RTL’s EditieNL. ‘Producing cheap meat entails abuses.’

Farm minister Piet Adema also described the footage as ‘disgusting’ and told RTL he is looking into a potential ban. ‘This is animal abuse and we need to act,’ he said. ‘And that is what we are going to do.’


Even meat with the Beter Leven mark does not guarantee the proper transport of animals, Schouten says. ‘Whether you buy organic meat with one, two or three stars, it gives no guarantee in terms of transport and slaughter. A Beter Leven quality mark says something about the quality of life in the barn. It’s good that it’s there, but those farms can also cooperate with transport companies that use the cattle prod.’

Consumer psychologist Marleen Onwezen told RTL that consumers are sensitive to these kind of images. ‘There is a group of people who are very concerned about the abuses. The images have a major impact on them. They adapt their behavior to it by becoming vegetarian, for example.’

The easiest way to end animal suffering, says Schouten, is to stop eating meat. ‘If you are really shocked by the images, then you should stop buying meat. Basically, it all has to do with how animals are regarded as worthless food,’ she said.

In June 2021, Varkens in Nood published undercover footage from a slaughterhouse which showed workers continuously mistreating pigs and other animals by hitting them repeatedly with paddles and giving them electric shocks.

The footage also showed how workers at the Gosschalk abattoir went out of their way to hide their actions from NVWA inspectors and warned newcomers not to mistreat the animals in front of the cameras.