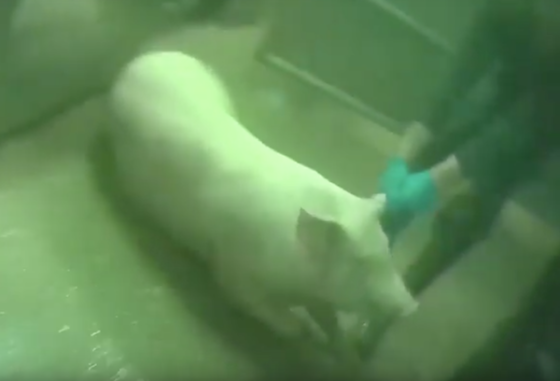 An animal rights activist, who went undercover at a slaughterhouse in Epe for 20 days, captured on camera workers continuously mistreating pigs and other animals by hitting them repeatedly with paddles and giving them electric shocks.

The footage, which has been seen by RTL Nieuws, was taken on behalf of pig charity Varkens in Nood. It shows how workers at the Gosschalk abattoir went out of their way to hide their actions from NVWA inspectors and warned newcomers not to mistreat the animals in front of the cameras.

The activist, named Robin by RTL, said that the abuse is daily reality at the plant.

The footage was recorded at the end of last year. The Gosschalk abattoir is one of the biggest in the Netherlands and kills 5,000 pigs and some 600 cattle a day.

Food safety inspectors haven since intervened at the abattoir, imposing extra camera surveillance and a ban on deliveries of live animals unless an inspector is on hand. The company too has suspended staff and said it will reduce the speed at which live animals are processed.

NVWA inspector general Maarten Ruys told RTL that the images were ‘repulsive’. ‘I am really shocked by this,’ he said. ‘We have had this company on the radar for longer and it has already been given warnings and fines because of animal welfare issues, but we did not know it was this bad.’

Animal medicine professor Len Lipman told RTL that the mentality, expertise and attitude of people working in slaughterhouses had to be improved. ‘If you don’t understand animals, and don’t understand that they also feel pain, then you might get this sort of behaviour,’ he said.

Varkens in Nood director Frederieke Schouten said that the suffering animals undergo ‘is down to us wanting to slaughter them as efficiently as possible to get meat which is as cheap as possible.

The NGO has started legal action against Gosshalk and set up a petition calling for the plant to be closed.  ‘We think the management should be punished because they are responsible for ensuring their workers treat animals properly.

Animal rights party PvdD has also called on farm minister Carola Schouten to intervene. ‘These are not excesses or incidents, this is structural abuse because of the way production has been set up … focused on making as much money as possible for the lowest possible price,’ MP Leonie Vestering said.

In particular, the party said the speed at which slaughterhouses operate at should be reduced immediately.