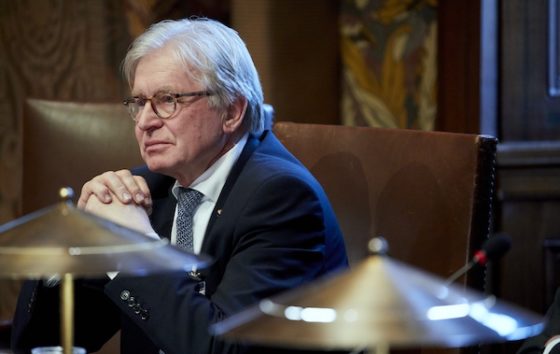 The Dutch security service AIVD monitored and tapped the phone of former senate leader René van der Linden because of his ties with people close to Vladimir Putin, the Volkskrant and NRC reported on Saturday.

Van der Linden, a former European affairs minister and senator for the Christian Democrats for 16 years, also made several trips to Moscow, the paper said.

According to the NRC, Van der Linden was a ‘pawn in a Kremlin plot to try to influence western public opinion and politicans in Russia’s favour’. ‘He spoke at conferences in Moscow and opposed European sanctions,’ the paper said.

In particular, Van der Linden had close contacts with Valeri Levitski, who was expelled from France in April 2018 because of espionage. Levitski also organized Van der Linden’s visits to Moscow, which were paid for by Russia, and ‘helped’ him maintain contacts with two Russian parliamentarians who had been placed on international sanctions lists, the paper said.

It was not until July 2019, after a visiting a conference in Moscow, that Van der Linden was warned about his Kremlin connections, both papers said. Van der Linden admitted he had been warned but would not say by whom.

He also told the Volkskrant he had no idea Levitski was a spy and that as soon as he heard, he broke all contact and wiped phone numbers. ‘Of course I am shocked he had a dual role, but I was never asked for any information,’ he told the paper.

Van der Linden told the NRC that it was ‘reprehensible’ the Dutch security services had not briefed him about Levitski earlier.