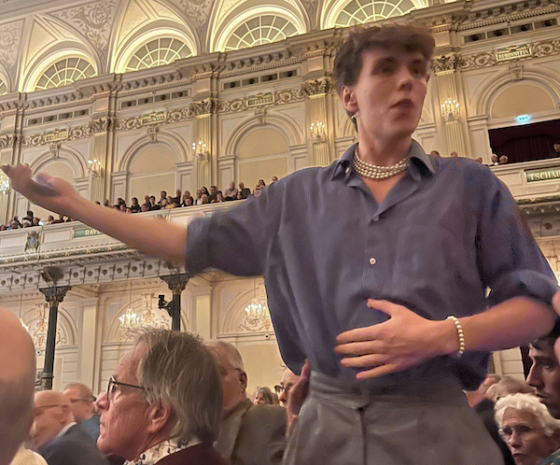 A still from the Extinction Rebellion video

Extinction Rebellion activists interrupted a concert at the Concertgebouw in Amsterdam on Wednesday night to call attention to the climate crisis, in the latest of a string of protests across Europe involving cultural icons.

A chaotic livestream of the event on social media showed one of the three activists, identified as ‘Sebastiaan’, climbing on his chair during a perfomance of Verdi’s Requiem and saying ‘I’m sorry but this is an emergency. We are in the middle of a climate crisis.’

The rest of his speech was largely drowned out by shouts from the audience. He was then pulled off the chair and removed from the hall by concertgoers.

Extinction Rebellion spokesman Jelle de Graaf, who earlier glued himself to the table during an appearance on talkshow Jinek, told the AD the activists had been pushed to the ground and forcibly ejected from the concert hall by 20 people. ‘It was a dangerous situation and all that because of a peaceful demonstration,’ he said.

De Graaf also said ‘Sebastiaan’ had then been set upon by security staff who ‘manhandled, pushed and shouted abuse at him.’

The Concertgebouw said in a statement it sympathised with the idea behind the action but objected to the way it was done. ‘These actions shouldn’t be aimed at cultural events. They can also lead to panic and danger to people,’ it said.

De Graaf said the requiem (a mass for the dead) had been chosen on purpose ‘because so many people are dying because of climate change’. ‘The Dutch elite is watching this while the climate crisis is happening. That is a sign of the lack of urgency,’ he said.

On Wednesday two of the activists who targeted Vermeer’s Girl with the pearl earring at the Mauritshuis in The Hague were sentenced to two months in jail, one suspended.