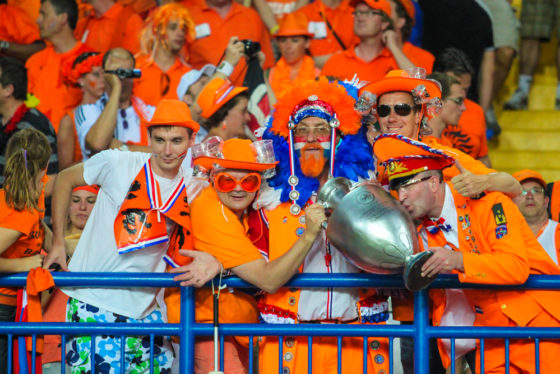 Dozens of Dutch football fans at next months’ World Cup in Qatar will be expected to promote the Gulf state and report ‘negative’ coverage on social media in exchange for free tickets.

NOS reported that 50 fans have been hand-picked to have their travel and accommodation costs paid by the Gulf state in exchange for posting and sharing promotional material on social media.

Organising favourable coverage on social media is a regular part of modern sports marketing, but commentators said the code of conduct signed by fans in Qatar goes far beyond the level of involvement required at other events such as the Olympics.

Qatar has invested heavily in marketing to counter criticism of its human rights record and the working conditions for immigrants who built the stadiums for the tournament. Former international player and World Cup ambassador Ronald de Boer sparked outrage in April when he questioned reports that as many as 6,500 migrant workers may have died.

Two veteran Oranje supporters, Ewoud Kervel and Leon van der Wilk, were selected as Fan Leaders by the tournament organisers and invited to hand-pick 50 fans to have their expenses paid.

Kerven and Van der Wilk confirmed to NOS that they had signed the code of conduct, which requires them to share posts by the organising committee and report ‘insulting’ messages by other fans.

They are also expected to wear their orange shirts prominently during the tournament and take part in five-a-side matches as part of the ‘fans’ World Cup’.

Van der Wilk told NOS the contract did not compromise fans’ freedom of expression. ‘We don’t have to lie about anything or cover things up. We’re allowed to be ourselves as long as we respect their culture. That has been personally guaranteed, because without that condition we would never have agreed.’

But another veteran supporter, Paul Hirschel, said he had turned down the offer because he did not want to be a ‘billboard for Qatar’.

‘The temptation to go along with it was a big one,’ he said. ‘You get a free flight and accommodation and you can go to the opening match. But the fact that we had to sign a document with all kinds of obligations and restrictions was a red line for us.’

‘It’s about the underlying conditions that go with it, especially the fact that you have to keep a close eye on what’s going on around you to see if your fellow supporters aren’t being positive about the organisers,’ he said. ‘You’re even supposed to give their names to the organisers.

So it’s not just about the influencers, which is a perfectly normal phenomenon: it’s the fact that you’re being used as a sort of spy.’