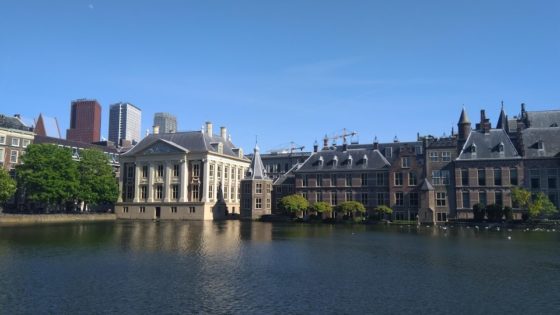 The parliamentary complex in The Hague. Photo: DutchNews.nl

New research by the Netherlands Institute for Social Research shows that only half the country has faith in the government and in parliament.

The SCP, a government agency that conducts social research, published its research on Thursday, showing residents of the Netherlands have a fairly pessimistic outlook about the workings of government.

According to the report, which surveys some 400 people every month between November and February, 49% of the Dutch think the country is going in the wrong direction. Only 50% have confidence in the government and 51% in parliament.

‘The Dutch especially appreciate free elections and freedom of expression. Yet most people see room for improvement,’ the report says. A much larger share of the population, 70%, say they have confidence in Dutch democracy.

According to SCP researcher Josje den Ridder, there have been times in the past 15 years when the numbers have dropped this low. Trust in government cratered during the austerity measures following the 2008 financial crisis and after the 2015 migrant crisis.

Den Ridder told NRC the drop is not merely a reaction to politics, but other factors also come into play: ‘Politics is a big cause of gloom, along with other matters, such as the housing market, asylum policy, the climate and rising prices.’

The report also shows that trust in government has become polarised. Some 80% of people who are a supporter of one of the four coalition partners see politics favourably while only 20% of supporters of right-wing opposition parties have this view.

‘What I’m starting to feel is that people are doubting: is everything in the Netherlands as well organised as we think?’ Den Ridder said.

This concern apparently started before the present issues of inflation and overcrowding at Ter Apel.

Distrust in politics was first seen during corona, when the government lagged behind other countries on vaccinations. The response to the Groningen gas crisis and the childcare benefit scandal also magnified the sentiment. ‘Apparently, people think, the government won’t help you when you’re in trouble,’ Den Ridder added.