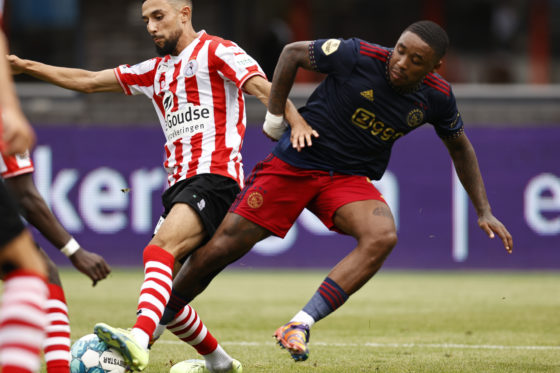 Ajax mustered an unconvincing 1-0 win at Sparta to go top of the Eredivisie after three games, but the talking point was the absence of €80 million transfer target Antony.

Coach Alfred Schreuder said he had left the Brazilian forward out of the team because ‘he wasn’t in the right state mentally to play’, but added he wanted the player to stay at the club.

The Amsterdammers have turned down an €80 million bid by Manchester United, managed by Schreuder’s predecessor Erik ten Hag, but could still leave if the English club raise their price before the transfer window closes at the end of the month.

‘I want him to stay, that’s clear, and I think he should stay if you look at all the players we’ve sold,’ Schreuder told NOS. ‘We’ve already sold five or six first-team players and I don’t think we should be selling another, but we know how football works.’

Ajax secured the three points thanks to a first-half strike by Steven Bergwijn, who shot low from just outside the penalty area after bursting through the defence, but goalkeeper Remco Pasveer also played a key role with two fine saves in the last 20 minutes.

Elsewhere in the Eredivisie, Feyenoord also scraped a 1-0 win at RKC Waalwijk with a penalty by Danilo after Patrik Wålemark was hauled down in the area.

Groningen prevailed by the same scoreline against Go Ahead Eagles, whose goalkeeper, Jeffrey de Lange, allowed a deflected shot by Laros Duarte to squirm under his body and over the line.

Go Ahead are one of three teams who have yet to register a point after three matches, along with Fortuna Sittard, who lost 4-1 at home to Cambuur Leeuwarden, and Vitesse, who went down 4-0 at home to Heerenveen, with Sydney van Hooijdonk scoring a hat-trick. The Arnhem club have conceded 12 goals in their opening three games.

Newly promoted Emmen got their first points on the board as they came back from 2-1 down at half-time to beat Utrecht 3-2 with second-half goals from Rui Mendes and Jari Vlak.

Four clubs who won their opening two matches, including newcomers Excelsior, had their matches postponed because of European matches for PSV, Twente Enschede and AZ Alkmaar. Those games will now be played on August 31 and September 1.