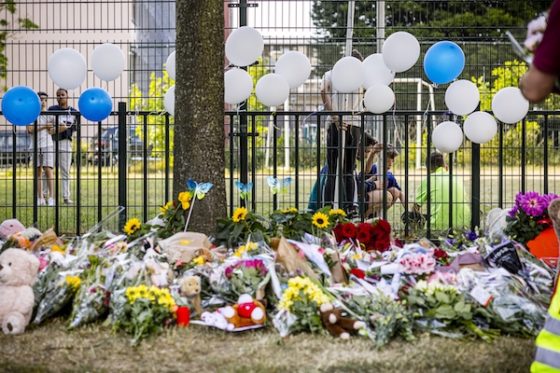 Flowers and toys left at the playground where Gino was last seen. Photo: Rob Engelaar ANP

Police in Maastricht have confirmed that the body of a child found on Saturday morning in Geelen is that of missing boy Gino.

The find was made following the early morning arrest of a 22-year-old man who is suspected of kidnapping and having a role in the boy’s death.

Dutch media have named the man as Donny M. He is described by neighbours in the Telegraaf as friendly, but a loner, who was well dressed and had only recently moved into the area. Police say he was ‘known to them’.

Searches have also been carried out in the man’s home and the place where the boy’s body was found, which is not far from M’s home, police said.

Gino van der Straeten disappeared early on Wednesday evening after going to meet other children in a playground in Kerkrade. He usually lived with his mother in Maastricht but had been lodging with his older sister Kelly for the past week because she was ill.

Hundreds of locals had helped comb the area where he was last seen, looking for clubs.

‘The family are devasted,’ spokeswoman Judy op het Veld from victim support group Slachterofferhulp told reporters. ‘They have been on a roller coaster for the past few days. They have a lot of support from people and organisations but that cannot take away their immense grief.’

Child abductions and murders are extremely rare in the Netherlands. Figures from national statistics agency CBS show that in the five years to 2020, 31 children were murdered in the Netherlands, 16 boys and 15 girls. Nearly all were killed by a parent.