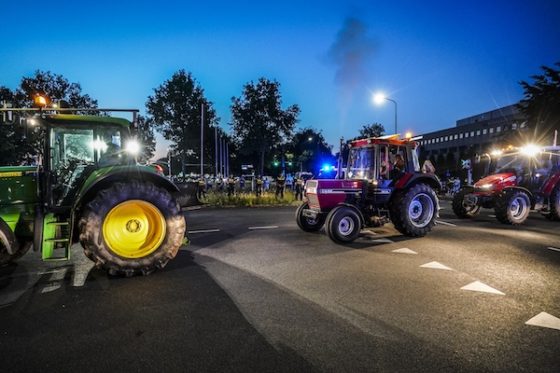 The police have now arrested 11 people for taking part in violent farmers’ protests this week, and more arrests have not been ruled out.

The latest arrest, on Wednesday evening, was of a 39-year-old man from Lochem, police said. He had a role in the Tuesday evening trouble at the home of government minister Christianne van der Wal, who has been charged with dealing with the nitrogen pollution crisis.

Police are studying video footage in an effort to identify as many people involved in the violence as possible.

On Wednesday night, police managed to stop a group on tractors from reaching a police station in the south west of Apeldoorn where some of the farmers who have been arrested are being held.

The A1 slip roads were closed for a time and the mayor invoked his emergency powers, allowing the police to close other roads which led to the police station. The emergency situation will remain in place until at least Friday, broadcaster NOS reported.

A number of farmers on tractor also blockaded the entrance to an Albert Heijn distribution centre in Geldermalsen for a time.

Prime minister Mark Rutte broke off from his visit to the Nato summit in Madrid to condemn the increasingly violent undertone to the demonstrations.

‘These are dreadful scenes,’ he said. ‘It’s a small group of farmers – the majority are demonstrating in a civilised way, but a small group is going over the limit.’

All three firms had fully supported the farmers protests up to now, Nu.nl said.

‘We distance ourselves from this sort of action,’ a spokesman for the VanDrie Group told news website Nu.nl. A spokesman for A-Ware, a family owned firm with annual turnover of some €2.2 billion, said it too considered that ‘intimidating people is going much too far’, and urged farmers to refrain from further action.

Police union chief Jan Struijs has told current affairs show Nieuwsuur that the farmers’ protests are turning into protests against the government and that ‘professional protesters’ are now taking part.

Struijs said he has received various reports about people who were earlier involved in anti-coronavirus protests, and members of far right groups, joining the farmers.

‘If people are being urged close down Schiphol, distribution centres and Rotterdam port, then we are talking about a different phenomenon,’ he said.