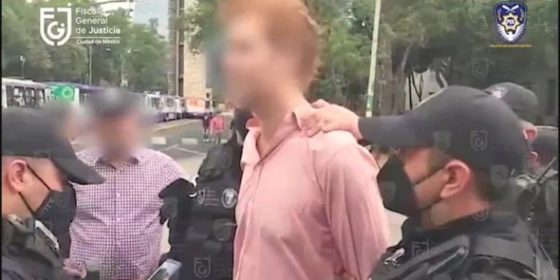 Mexican tv footage of the arrest, released by the justice ministry

A Dutch national and pro-paedophilia campaigner who is wanted in the Netherlands  has been arrested in Mexico, the Telegraaf reported on Tuesday.

Nelson M, 27, had been due to appear in court in the Netherlands at the beginning of this year but had fled to Mexico where, according to his lawyer Theo Hiddema, he requested political asylum.

The Mexican public prosecution department said during a new conference on Monday that M had been arrested in Mexico city thanks in part to input from the Free a Girl foundation and international aid group Operation Underground Railroad.

He was found to have a gun, child pornography, cocaine and computer hard disks with him when arrested, the paper said.

‘We are very relieved that Nelson M has been arrested. He was a real danger to children in Mexico,’ the Free a Girl association said. The Mexican authorities had taken the case ‘extremely seriously’, the group said.

The group also criticised the Dutch public prosecution service for failing to put M on an international wanted list and failing to confiscate his passport. As yet, it is unclear if the Netherlands will make a formal extradition list for his return.

The Dutch supreme court banned the pro-paedophilia organisation Martijn in 2014 because its members promoted sexual relationships between adults and children.

Two other former members, Marthijn U and Norbert de J were jailed for four and six months earlier this year for continuing the group