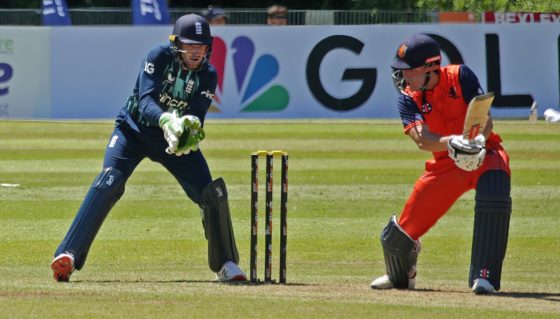 An all-round dominant performance from England saw them win by 8 wickets and 119 balls to spare to complete a resounding 3-0 series over the Netherlands in Amstelveen.

The win also helped England top the World Cup Super League table, while the Dutch remain at the bottom with just two wins from 16 games.

England’s stand-in skipper, Jos Buttler, filling in for the injured Eoin Morgan, won the toss and opted to bowl first on a slower surface. As one Bristolian in left-arm quick David Payne made his England debut, his Gloucestershire teammate, Paul van Meekeren, returned to the Dutch side from county cricket commitments alongside Kent’s Fred Klaassen.

Vikramjit Singh, who endured a difficult series after impressing against the West Indies, fell for 7 to David Willey, in a carbon-copy dismissal from the 2nd ODI, caught inside the ring pulling a short ball. From there on, the Dutch batters O’Dowd and Tom Cooper made hay, crunching 11 boundaries between them as the duo was particularly strong through the covers and with the pull shot against the short balls. The pair was also involved in a counter-attacking 72-run partnership.

O’Dowd brought up his half-century in the 24th over but feathered a leg-break from Liam Livingstone through to Buttler behind the stumps. Bas de Leede built on his promise to register his maiden ODI half-century off 71 balls, striking three boundaries, but fell to Brydon Carse in the 40th over, in a bid to up the ante.

His wicket precipitated a stunning collapse as the Dutch lost their last 7 wickets for a mere 41 runs and were bowled out for 244 from a strong position of 203-3. More importantly, they could only manage four boundaries after the 20th over and none in the last 10, once again highlighting the issue of lack of boundary-hitting during the middle-overs.

However, newly minted captain Scott Edwards continued his rich vein of good form and stood tall to bring up his 8th ODI half-century, and third in the series, as wickets fell around him. He perished in the penultimate over looking for boundaries but could only succeed to be caught at mid-on and hand Payne his maiden International scalp.

For the visitors, David Willey was the pick of the bowlers with returns of 4-36 as he took the three of the last four wickets to fall.

‘We were looking at 280,’ Edwards said after the game. ‘We thought the pitch was starting to slow down and spin, that would have us in the game, but credit to England, they bowled really well after the 30th over to tie us down and take those wickets.’

England’s chase dispelled notions of the pitch slowing down further as Jason Roy, Phil Salt and Jos Buttler took the pitch out of the equation to race to the target in 30.1 overs.Roy and Salt struck 14 boundaries between them in the power play as the Dutch bowlers erred bowling either too short or too full.

It took van Meekeren’s back-of-a-length deliveries to match England’s intensity with the ball as the 10th over produced two wickets in three balls. Salt was bowled with a sharp nip-backer that hit the top of leg stump, one short of a half-century, and Malan was similarly dismissed, bowled round his legs for a duck. The Dutch may have sniffed a chance to cause an upset but it wasn’t to be.

Roy and Buttler then combined for an unbeaten 163-run stand. However, Roy was dropped twice, on 51 by Edwards off Dutt and later on 75 as Klaassen couldn’t hold on to a return catch.

Roy went on to hit his 10th ODI century, a knock that featured 15 boundaries, all around the ground with majority struck on the leg-side. Buttler, who was also adjudged the player-of-the-series for finishing as the leading run-scorer with 248 runs, produced another range-hitting masterclass on his way to a 64-ball 86, hitting seven boundaries and five sixes and fittingly sealed the chase in the 31st over.

‘I thought today was a harder wicket [to bat on] but they made it look pretty easy. It is what it is,’ Edwards said. ‘We took some good learnings from the series, the boys will be better for it and we will come back harder in our next series.’

The Netherlands will now regroup and focus on the T20 World Cup qualifiers to be held in Zimbabwe from July 11-17.