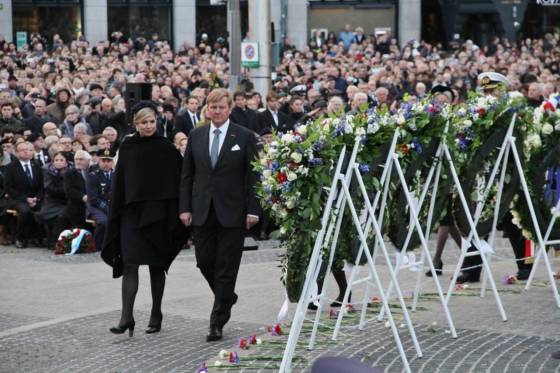 The king and queen walk past the wreaths at the end of the ceremony. Photo: Odi Busman

Some 83% of the Dutch population say that Remembrance Day is an important event in the calendar, according to the annual Freedom Survey carried out by the Nationaal Comité 4 en 5 mei, which organises the commemorations.

And Liberation Day, which is celebrated on May 5, is considered to be important by 75% of those polled, the committee said on Tuesday. The figures are unchanged from 2021.

The Netherlands will fall silent for two minutes at 8pm on Wednesday night, as the country remembers the Dutch who died in World War II and in subsequent conflicts.

Trains and cars will come to a halt and there are no take-offs and landings at Schiphol airport during two minutes’ silence, which takes place at 8pm. Shops and supermarkets are required by law to close at 7pm, and bars and restaurants warn their clients that the music will stop for a short period of reflection.

The main ceremony, at the Dam war memorial in the centre of Amsterdam, will once again attract thousands of people after two low key years because of the coronavirus restrictions.

The Netherlands will fall silent for two minutes on May 4: this is why

King Willem-Alexander and queen Maxima will lay a wreath at the war memorial, along with survivors of WWII, members of the armed forces and family members of those who died.

As well as the main event, which is televisied, there will be hundreds of other ceremonies all over the country to mark different war-related events. Find an event near you.

Then on Thursday, the Netherlands celebrates its liberation with festivals and events nationwide.

The celebrations start in Wageningen around midnight where the Liberation flame is lit and torches are then taken by 1,300 runners in relay to other fires all over the country.

Germany signed the capitulation documents in Wageningen on May 5, 1945. The south of the country had been liberated months earlier.

This year, much decorated army officer Gijs Tuinman will give the traditional May 5 reading in Oss. And 14 formal Liberation Day festivals are being staged: in Zwolle, Leeuwarden, Assen, Almere, Utrecht, Rotterdam, The Hague, Amsterdam, Haarlem, Wageningen, The Hague, Roermond and Vlissingen. More information here

This year’s festival ambassadors are Suzan & Freek, Duncan Laurence, Fresku and Donnie, who will visit all 14 events by helicopter between them. This year’s festivals will also include a special focus on the war in Ukraine, the organisers say.

A relatively new addition to the day are the ‘freedom meals’, held at a wide variety of locations nationwide and with a special ‘freedom soup’ on the menu.

The celebrations will end with the traditional May 5 concert on the Amstel river in Amsterdam, which will broadcast live on television and attended by king Willem-Alexander and queen Máxima.