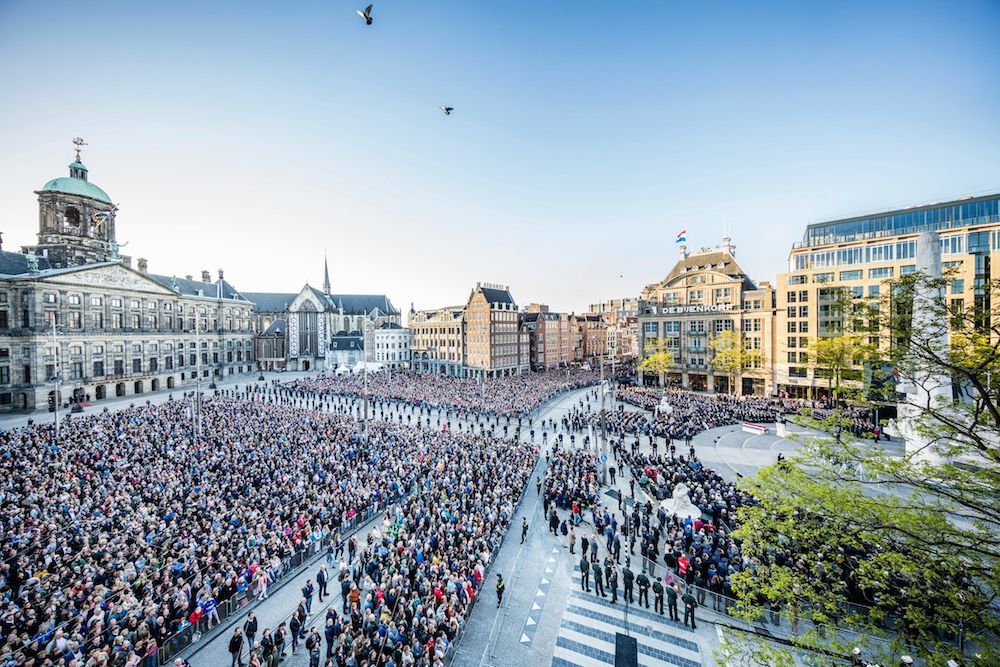 The Netherlands remembers the Dutch victims of World War II on Saturday May 4 with Remembrance Day ceremonies throughout the country.

Trains and cars will come to a halt and there are no take-offs and landings at Schiphol airport during two minutes’ silence, which takes place at 8pm. Shops and supermarkets are required by law to close at 7pm, and bars and restaurants warn their clients that the music will stop for a short period of reflection.

The main event takes place on Dam square in the centre of Amsterdam, where king Willem-Alexander, queen Maxima and other dignitaries will lay wreathes at the war memorial.

Amsterdammer Sandra Boot, 53, told DutchNews.nl she will be at the Dam as usual. ‘I always take part in the ceremony, and did so as a little girl,’ she said. ‘It is important to reflect on what people went through during the war so that we can live the way we do today.’

A survey by the National 4 and 5 May Committee, which supervises the events to mark the national day of remembrance and Liberation Day on May 5, said earlier this week that Dutch people valued the low-key tone of the commemorations and did not want to make them more ceremonial.

A growing number said the commemorations should be extended to cover the war dead of all nationalities, a suggestion that has caused controversy in previous years.

As well as the main event, which is televisied, there will be hundreds of other ceremonies all over the country to mark different war-related events.

In particular, there will be a special ceremony at the Homomonument in Amsterdam to the gay men and women who lost their lives during WWII.

Dia Roozemond, owner of Amsterdam café Saarein, always closes up for 90 minutes on May 4, and goes with customers to the monument to pay her respects. ‘It is very important that people remember that the way we are living in the Netherlands is due to the sacrifices of others,’ she said.

Customers understand that the bar will close while the ceremony takes place. ‘I’ve had people leave their drinks on the table because they know they will be coming back,’ she said. ‘It is no big deal. People are used to taking part.’

The National 4 and 5 May Committee has a listing of events taking place nationwide.

On May 5, the Netherlands celebrates its liberation with 14 festivals all over the country, culminating in a televised concert attended by royalty on a floating stage in the Amstel river in Amsterdam