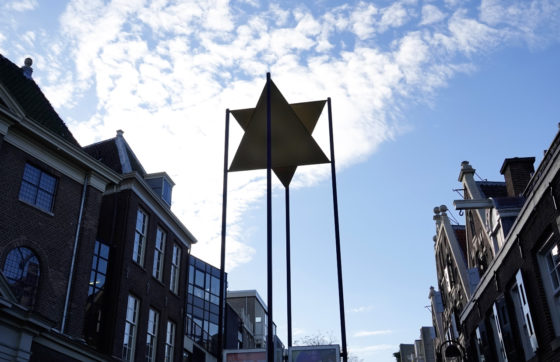 A Star of David in the Nieuwe Amstelstraat in Amsterdam. Photo: ANP/HH/Belinda van Dam

Relatives of Jewish families whose homes were seized during the Second World War while they were detained in concentration camps are still fighting for compensation from local councils.

During the housing shortage immediately after the war rules were drawn up allowing uninhabited homes to be allocated to local officials.

Holocaust survivors often returned to find their homes were occupied by other people who refused to move out. The Jewish liaison council CJO estimates that several thousand people were deprived of their property in this way.

They faced lengthy legal battles to reclaim their rights, especially in cases where ownership records had gone missing or been destroyed during the war. Some of them opted to sell their houses to the occupiers for well below the market value.

‘You were the owner, you’d lived there but someone else was in there,’ former CJO chair Ronny Naftaniel told Nieuwsuur. ‘If that was a civil servant you couldn’t get in. There are hundreds, possibly a few thousand cases where that happened.’

Nieuwsuur featured the case of Hubert Blankenstein, who visited the home in Groningen where his parents lived before the war for the first time this year, at the age of 75.

His mother was the only member of her family to survive the camps, but when she returned to the Netherlands her former house had been given to an official in the fire service. Later on the city’s mayor lived there.

‘My grandparents built this house and my mother and her brother grew up here before the war,’ he said. ‘I should have been born here 75 years ago, but my mother wasn’t allowed into her own house.’

Van Blankenstein is demanding an apology and €300,000 in compensation from Groningen city council, but has rejected an offer of mediation.

The city’s current mayor, Koen Schuiling, said ‘the right thing had not been done’ in the case of Mrs van Blankenstein and the council was committed to putting the record straight.

‘We are going to talk to Mr van Blankenstein with the best and honest intentions so we can come to an agreement. We will learn the lessons of the past. The right thing did not happen. That’s what we’re going to do now.’