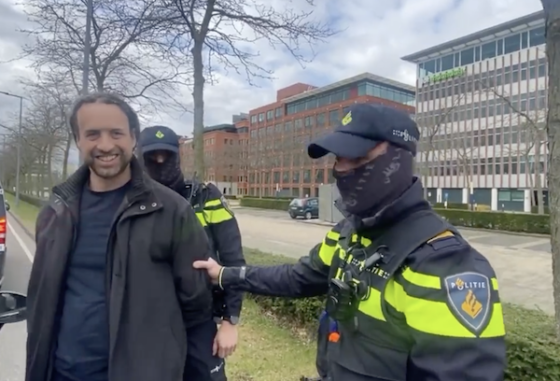 A still from a video of the arrest on Sunday. Photo: dorienrose

Willem Engel, one of the main anti-coronavirus measure campaigners in the Netherlands, has been arrested again – this time for breaking the terms of his bail.

Engel was released from custody last Wednesday after spending two weeks in jail following his arrest for incitement.

One condition of his release is that he refrains from making comments on social media. However, on Friday, Engel appeared on a YouTube channel alongside his legal advisor, talking about his arrest and the legal cases against them.

Engel has reported said he does not believe he broke the terms of his release because they only applied to his personal social media accounts.

The YouTube show was also shown on the Facebook and Twitter accounts of Engel’s campaign group Viruswaarheid. He was arrested while on the way to a demonstration in Nijmegen.

Engel was originally arrested for placing at least seven messages on social media which could be considered incitement to break the law.

These included photographs of health service staff who worked in vaccination centres ‘for later’ – which could have led people to commit a criminal offence, the department said at the time.