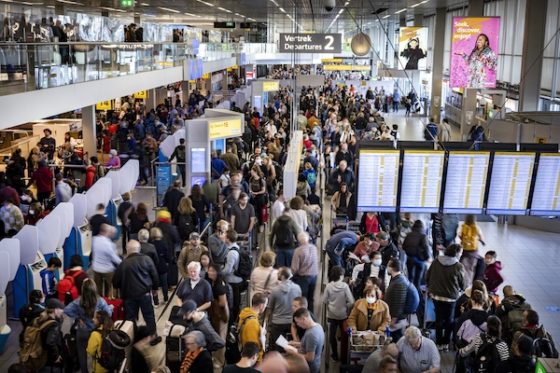 Dozens of flights to and from Schiphol airport were cancelled on Saturday morning because of a wildcat strike by KLM ground crew.

The strike, on one of the busiest days of the year, led to long queues which reached outside the main terminal building. The A4 slip roads to the airport were also closed for a time as a safety measure.

The strike ended in the early afternoon but the airport authority still urged passengers with a flight before 3pm not to come to the airport. ‘This is an extreme and very annoying measure that Schiphol has to take in the interest of safety,’ the Schiphol website said.

The problems were caused by the refusal of ground crew to load and unload planes from 6am on Saturday morning, which had a knock-on effect across the airport. Some planes may also have left without baggage on board.

The baggage handlers are furious because KLM is planning to outsource some of their work to another company, which, they say, could threaten their jobs.

Schiphol expects to process around 500,000 passengers in the coming few days because of the half term holidays.