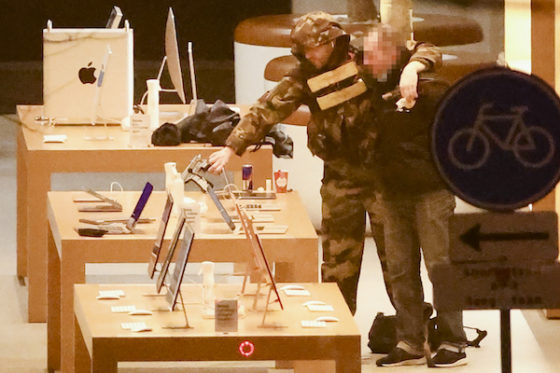 Akkad with his hostage inside the Apple store. Photo: Dim Balsem ANP

The 27-year-old Amsterdammer who took another man hostage at the Apple store on the city’s Leidseplein on Tuesday, and demanded €200m in crypto currencies, has died of his injuries in hospital.

The man, named by the Parool as Abdel Rahman Akkad, was hit by a police car after he ran out of the building on Tuesday night, when his hostage escaped.

Lawyer Jan-Kees van den Brink, who represented Akkad in several court cases, told the paper he was breaking the news on behalf of his mother. ‘He was no longer responsive and has died,’ Van den Brink told the paper.

Akkad entered the store on Tuesday afternoon, dressed in camouflage gear and with explosives attacked to his chest. Footage and photos on social media showed him with his arm round the hostage, a 44-year-old Bulgarian national, and holding a gun to his head.

He had also fired several shots after entering the store.

The stand-off lasted almost five hours and ended when Akkad asked for water. When it was delivered by robot, the hostage saw his chance to escape and ran off. Akkad gave chase but was hit by a police car, rolling over the bonnet and hitting the ground.

The collision was filmed by eyewitness Zoey To, who told broadcaster NOS she is still shaking after what she saw.

Around 70 people were in the building at the time, but police had managed to lead some to safety.

Police said later the explosives strapped to his chest had not been primed to go off.