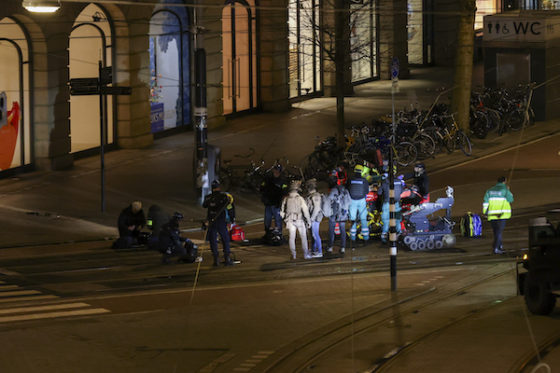 The gunman who took another man hostage at the Apple store on the Leidseplein in Amsterdam on Tuesday afternoon is a 27-year-old local who had demanded €200m in crypto currency, police said at an overnight press conference.

The man, who took his hostage almost immediately after entering the shop at around 5.30 pm, had threatened to blow himself up if his demands were not met.

Police were able to identify him after around 90 minutes and said he had a criminal record for breaking the gun laws. They also searched two homes in the city – one in which he lived and another in which he often stayed – while the siege continued.

Police said about 70 people were in the store when the gunman burst in and took his victim hostage. ‘The suspect had a gun trained on his hostage the whole time and threatened to blow himself up,’ police chief Frank Paauw said. ‘We don’t think he knew how many people were in the building.’

The hostage, who was unhurt, is thought to be a 44-year-old British national who was shopping in the store at the time.

Four people remained hidden in a broom cupboard on the ground floor throughout the incident.

‘They lived in terror for hours,’ deputy mayor Rutger Groot Wassink said. ‘We have organized victim support for them and are glad that everyone is now safe.’

The police said the hostage taker had contacted them himself and had opened fire when they arrived, delivering at least four shots. The gunman was armed with a pistol, and automatic weapon and was wearing a jacket designed to look like a bomb. Some eyewitnesses had reported hearing gunfire.

The stand-off ended shortly after 10.30 pm when the gunman asked for water, which was delivered by a robot. As he left the building to pick it up, the hostage took the opportunity to escape and ran off.  He was chased by the gunman – who was then hit by a police car which drove at him, knocking him to the ground – all of which was captured on eyewitness cameras.

After a robot check for explosives, the man was taken to hospital. His condition has not yet been made public, but he was able to talk in the ambulance, police said.

Local broadcaster AT5 said it had been contacted by the gunman while he was in the Apple building, and had been sent photos showing what appeared to be explosives attached to his jacket.

The broadcaster said it had sent the photos directly to the police.

All three Apple stores in the Netherlands in Haarlem, Amsterdam and The Hague, will remain closed on Tuesday.