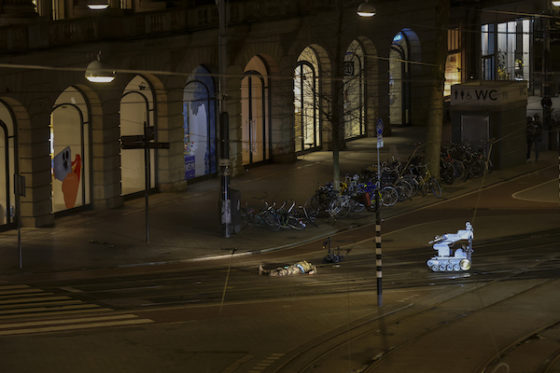 The hostage taker lies on the ground after being hit by a police car. Photo: Laurens Bosch ANP

The hostage situation in the Apple store on Amsterdam’s Leidseplein ended shortly after 10.30 pm, when the hostage ran out of the building and a police car drove into the gunman who was chasing him.

Eyewitness footage shows two people running out of the building, and one being hit by a police car which drove at them at speed. He lay motionless on the road for a time, as a robot moved in to scan him for explosives.

Police have confirmed that they have taken a man into custody but have said nothing about his condition, apart from that he is is in the care of medical staff.

Around an hour earlier, several dozen people were brought to safety out of the store. They were thought to be both staff and shoppers who were on upper floors of the shop when the armed robbery took place and had taken refuge in the canteen.

The incident started at around 5.40 pm when eyewitnesses told local broadcaster AT5 that shop staff rushed out of the building in a panic.

Shortly afterwards, ‘police were running around in a big group with guns pointed at the Apple store,’ Tim Wagemakers, who works at the nearby Balie debating centre said.

According to local broadcaster AT5, eyewitnesses heard several shots soon after the stand-off started but this has not yet been confirmed.

Just before 7pm, police confirmed that there was someone with a gun in the store. ‘The police are present with a large number of specialists to get the situation under control,’ police said.

Police sealed off a large area around the Leidseplein and public transport was disrupted. People in shops, cafes and offices on the square were also urged to remain indoors.