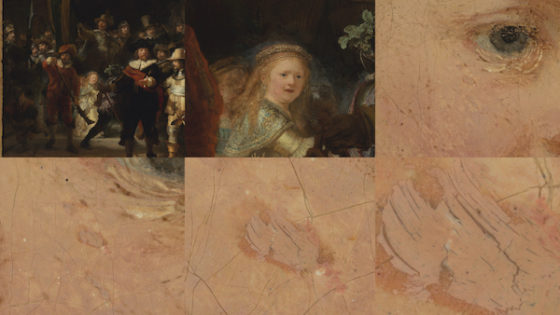 The Rijksmuseum in Amsterdam has published a 717 gigapixel photograph of Rembrandt’s famous Night Watch, allowing viewers to zoom in on tiny particles of paint.

The image has been compiled out of 8,430 individual photographs and the project was described as an ‘unbelievable challenge’ by Rob Erdmann, the Rijksmuseum scientist who put the giant photo together.

The compilation, the museum says, is the largest and most detailed photograph of any artwork, and is four times sharper than its predecessor, which the Rijksmuseum published around 18 months ago.

The museum is currently closed because of coronavirus, but the image has been uploaded to the website so that everyone can view it.

The Night Watch, closer than ever! With our extremely detailed, 717 gigapixel, photograph of Rembrandt’s Night Watch it is now possible to zoom in even further on minute, pin-sharp particles of pigment in The Night Watch. ✨

Last month, the Rijksmuseum announced that a 2.5 year unprecedented research effort into the Night Watch has shed important light on how Rembrandt worked, damage to the painting over the years, and how to restore it.

This month, work is beginning on a two to three month restoration to attempt to fix deformations in one corner, using weights to help flatten the painting.