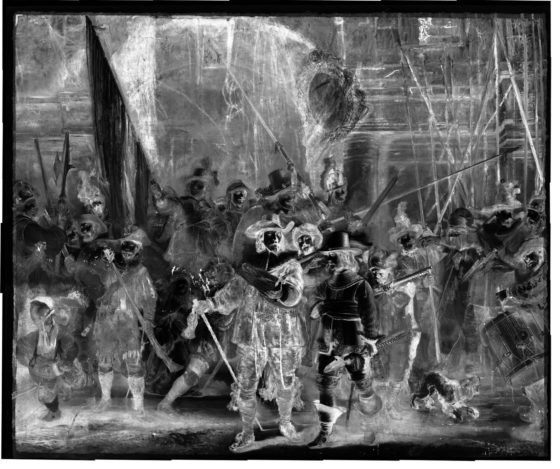 After more than 25 different scanning methods, two and a half years and a team of researchers working despite coronavirus behind a glass box, Operation Night Watch has reported its findings.

The Rijksmuseum has announced that its unprecedented research effort into Rembrandt’s Night Watch has shed important light on how Rembrandt worked, damage to the painting over the years, and how to restore it.

Using scanning techniques to create maps for minerals including iron, calcium, copper and arsenic, the Rijksmuseum has discovered a previously hidden sketch behind the painting which it says ‘allows us to look over the artist’s shoulder’ and understand his confidence in sketching directly onto the canvas.

But the research also revealed that troubling deformations in the top left of the painting were probably caused during 2003 to 2013, when it was moved into the Philips Wing during renovations of the dilapidated building.

Taco Dibbits, director of the Rijksmuseum, said in a press conference on Wednesday, that the research had borne important fruit. ‘The discovery of the sketch represents a breakthrough in this research,’ he said.

‘We always suspected Rembrandt must have made a sketch on the canvas before embarking on this incredibly complex composition, but we didn’t have the evidence. We are currently able to look beneath the surface of the paint better than ever before and now we have the proof, giving us a real understanding for the first time of how the painting was made…We have discovered the genesis of The Night Watch.’ 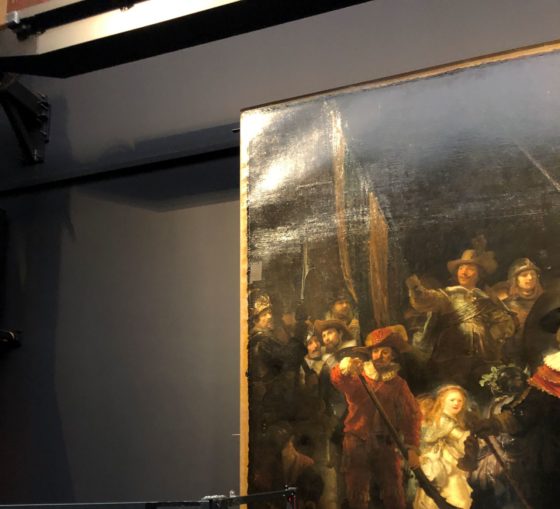 Comparing images of the sketch behind the painting and the surface, for instance, researchers found that Rembrandt originally made feathers for militiaman Claes van Cruijsbergen’s helmet, but then painted them over, adjusted the leg position of another character and originally painted a central sword and multiple spears above the company. His massive 1642 masterpiece shows civic guardsman marching out to defend the city, and was considered daringly dynamic for its time.

Petria Noble, head of paintings conservation at the Rijksmuseum, said that the museum will immediately begin a two to three month restoration to attempt to fix deformations in one corner, using weights to help flatten the painting. ‘This will be a structural treatment – you saw very clearly the deformations, which are quite pronounced in the upper left corner,’ she said.

‘The painting will be taken off its current wooden stretcher [which] we strongly feel is contributing to the problem because it reacts differently to the canvas. It will then be put onto a new strainer, a non-reactive material that we feel will be much more stable. This is very important for the long-term preservation of the painting.’ 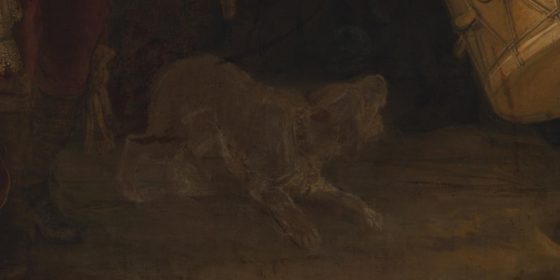 The research, which included taking more than 12,500 photos at extremely high resolution, also revealed that a dog which appeared to be fading has changed in appearance due to attrition in the top layers of paint, revealing the light-coloured sketch behind. This attrition – possibly partly caused by previous treatments – is also visible in the disappearance of a cloud of smoke, which was recorded in a contemporary copy of The Night Watch attributed to Gerrit Lundens.

Meanwhile, the research has given insights into how certain colours such as a ‘smalt’ blue derived from blue cobalt-based glass have faded, while old varnish layers and retouching have also discoloured – in one instance, giving a militiaman’s face the appearance of ‘a rash’. There are also miniscule white spots, known as lead soaps, which are common to 17th century paintings, and the museum will decide whether or not to conduct restoration on areas such as the face of the main figure, Frans Banninck Cocq. A symposium on Wednesday is discussing the findings in more detail.

Noble added: ‘An all-encompassing approach such as this would have been impossible even a few years ago, which means Operation Night Watch is setting a new standard for the study of painting. All these discoveries now prompt us to look at Rembrandt’s other paintings with different eyes – we now know what we should be looking for.’