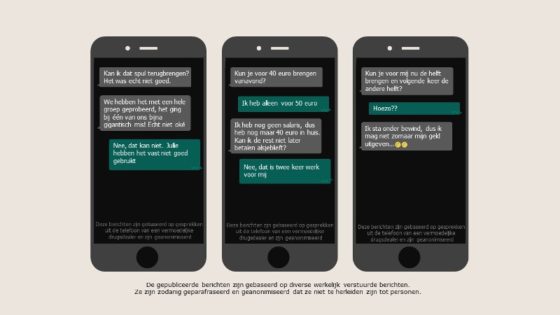 This police illustration shows the sort of messages they found

Police in Nijmegen will send a text message on Monday to 3,500 drug users, whose phone numbers they found on dealers’ telephones, pointing out where they can get help.

The numbers were found on phones from a dozen or so dealers who were picked up following a major investigation into a local drugs gang. Ten people will appear in court later this year.

Nijmegen police chief Lonneke Hordijk said they had been shocked by the messages found on the phones, in which users begged for credit because they had run out of money. In one message, a woman urged the gang not to give her husband any more drugs. In another a couple urged the gang to make a delivery before their children got home.

The text message which police will send out on Monday directs people to a website where they can get help with breaking their habits.

The message, said Hordijk, is to show people that they are not alone and that there is help. In addition, the police hope that people who are only incidental users will be shocked by the message, and persuaded not to get in deeper.

It is not the first time the police have targeted drug users whose numbers they found during an investigation. A similar campaign in Zwolle last year, involved 750 users and led to the website being viewed 3,000 times.