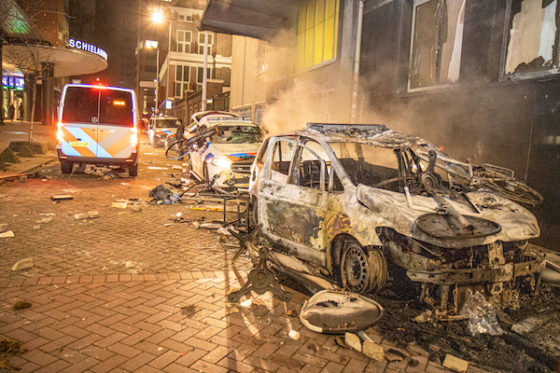 The aftermath of the riots. Photo: ANP / Hollandse Hoogte / GinoPress

Several of those injured were shot by police who apparently fired directly at people after warning shots failed to break up the crowd, although the circumstances of the shootings are not yet clear.

Among the injured are rioters, a journalist who was attacked by the mob and police officers, Aboutaleb told a press conference at city hall.

The trouble started at around 8pm when a group of around 100 people gathered on the Coolsingel in the city centre in an impromptu protest against the coronavirus restrictions. Cafes and bars have to close their doors at 8pm.

But within an hour the crowd had grown in size and the situation had turned nasty. Gangs of men began throwing fireworks and set several police cars on fire.

Riot police were drafted in to restore order, and some were brought in from other parts of the country, Aboutaleb said. In total around 400 riot police officers were on duty as well as regular police. 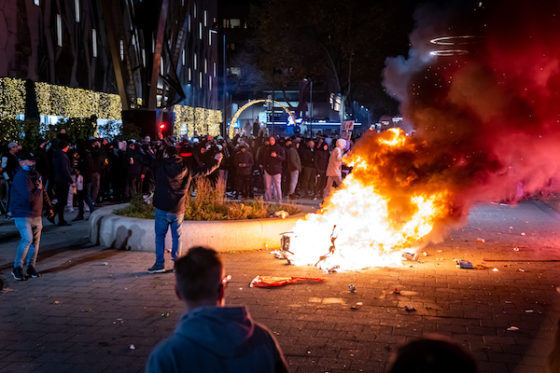 Part of the city centre was sealed off for a time and train services to and from the city’s main railway station were disrupted.

Many of those in the crowd were out to cause trouble, Aboutaleb said. ‘They were challenging the police, putting up barricades, setting mopeds on fire… and that is why the police felt the need to defend themselves on several occasions,’ the mayor said.

Riot police also had to intervene to allow the fire brigade to put out the fires.

It took until around midnight for order to be restored.

The first confrontation between the police and
protesters prior the warning shots #Rotterdam pic.twitter.com/Yg7WRFoONT

The city’s police said in a statement that they are studying video footage of the riots and more arrests will follow.

The last time Dutch police fired directly at crowds during riots was in 2009. Then, one person was killed by a police bullet during the so-called ‘beach party riots’, triggered when two plain clothes officers were turned on by a group of youths.

In 1999, four people were injured by police bullets after riots erupted during the celebrations to mark Rotterdam football club Feyenoord taking the league title.