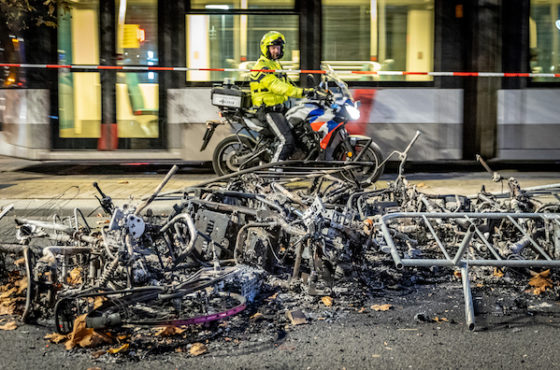 The remains of bikes and mopeds after the riots. Photo: Jeffrey Groeneweg ANP

The number of people arrested during and after Friday night’s riots in Rotterdam has risen to 51, police said on Saturday afternoon.

Police also confirmed two people had been shot. Both have been hospitalised, and police are now checking to confirm if they were hit by police bullets. Police have said they shot at the crowd on ‘several occasions’.

As yet, the circumstances of the shootings are still unclear, and a formal investigation is now underway.

Around half the rioters who have been arrested are minors and they came from all over the country, police said.

Jan Struijs, of police union Nederlandse Politiebond said there appeared to have been two instances in which police fired at the crowd. In one, police were driven into a corner by a large group of rioters,’ he told broadcaster NOS.

‘In the other, it was about protecting fire officers, who were being attacked so they could not put out a fire. Police then shot at people’s legs.’

More arrests are not being ruled out. Rotterdam city centre is well equipped with surveillance cameras which will be used to identify the rioters, mayor Ahmed Aboutaleb said earlier.

People arrested in the wake of the riots will be tried via the fast-track court system, justice minister Ferd Grapperhaus said in a reaction to the trouble.

Grapperhaus spoke of his ‘deep respect’ for the police, fire brigade and other emergency service workers who were caught up in the violence.

‘The right to demonstrate is an important one in our society, but what we saw yesterday was simply criminal behaviour,’ he said. ‘It had nothing to do with demonstrating.

‘It is important that we keep talking to each other, and where necessary, have a tough debate. But intimidation and violence should not be part of this.’

Police union ACP accused politicians of shedding crocodile tears. ‘If there was more police capacity, we would have been able to nip this in the bud,’ a union spokesman told broadcaster NOS.