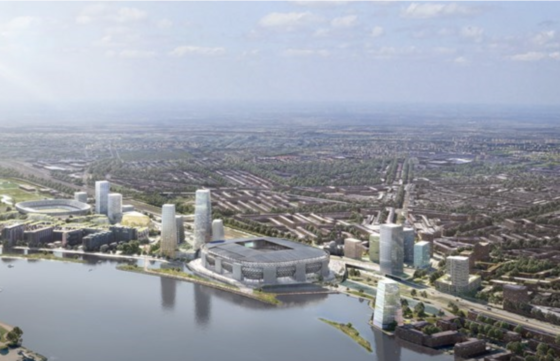 An artist’s impression of the Feyenoord City development. Illustration: OMA

Rotterdam city council executives do not yet want to abandon plans for a new stadium on the edge of the Maas river, even though football club Feyenoord has said it is ‘reconsidering’ its position.

The city’s housing and planning chiefs first want to find out more about the likely impact of the €180m price hike announced by construction company BAM and which became public earlier this week, before taking a decision, the Financieele Dagblad reported.

The new stadium would be at the heart of the ambitious Feyenoord City project, which includes thousands of new homes, shops and offices in one of the poorest parts of the country.

The city is set to pay the €60m cost of the land under the stadium and €40m in new share capital.

The proposed move to a new stadium was bitterly opposed by many Feyenoord fans, who staged protests in De Kuip against the plan. Architects involved in the project were targeted at their homes and offices and Feyenoord director Mark Koevermans recently decided to step down from his post after receiving threats.