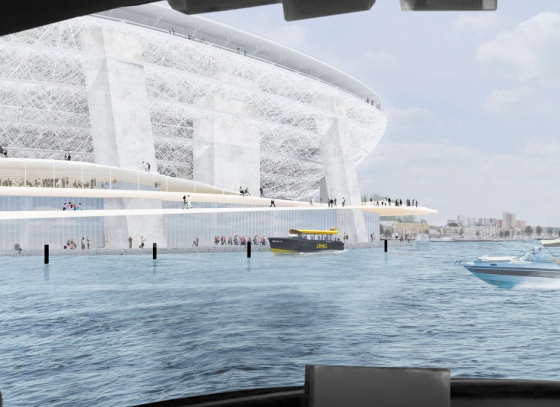 No go: An artist’s impression of the proposed stadium. Picture: OMA

Feyenoord have abandoned plans for a new stadium on the banks of the Maas because of rising building costs and demands by construction firm BAM, local TV network Rijnmond reports.

The club decided the Feyenoord City project was unfeasible after it was unable to agree a fixed price with BAM, Rijnmond reported. The €450 million project included plans to build shops and houses as well as a 63,000 capacity stadium.

A spokesman for the club said a decision would be made in a few weeks, following the timetable set out a year ago when Feyenoord put the project on hold, but other sources told Rijnmond that the decision was inevitable.

The proposed move to a new stadium was bitterly opposed by many Feyenoord fans, who staged protests in De Kuip against the plan. Architects involved in the project were targeted at their homes and offices and Feyenoord director Mark Koevermans recently decided to step down from his post after receiving threats.

The club is expected to cite a shift in BAM’s business strategy away from high-risk projects as part of the reason for the project’s failure. The parties have been in talks since 2019 over the cost of the stadium, but BAM’s most recent valuation, which reflects the rising cost of building materials, was beyond Feyenoord’s reach, according to Rijnmond.

Rijnmond reported that Stadion Feijenoord, the company that owns its current De Kuip stadium, faced bankruptcy because of the decision, which would cost the club €2.8 million. The €40 million that Rotterdam city council earmarked for Feyenoord City will also not be forthcoming.

Robert Simons, councillor for local party Leefbaar Rotterdam, said: ‘It’s a pity, but it’s unavoidable and everyone who’s been involved in this project could see it coming from a long way off.’

The club’s decision reflects a deeper financial malaise, according to NOS commentator Arno Vermeulen. He told Studio Voetbal on Sunday that Feyenoord had an outstanding tax bill of €10 million and faced having to pay back a bridging loan of €30 million to fund the stadium project to US investment bank Goldman Sachs.

‘Feyenoord is on the edge of the abyss, financially speaking,’ Vermeulen said. ‘I don’t think many people understand how bad the situation is. They can’t even pay their taxes.’

He added: ‘The Americans [Goldman Sachs] agreed a collateral. If Feyenoord can’t make the payments, the stadium will go to the American bank. It’s a really dreadful situation.’

The alternative scenario is to remain in and renovate De Kuip, but Feyenoord will have to start from scratch at a time when material costs and waiting times in the building trade are rising.

A spokesman for Stadion Feijenoord said the reporting was ‘speculative’ and no decision had yet been taken. ‘We are negotiating intensively with all parties involved over how we can deal with the current circumstances in the building market. As soon as conclusions have been reached, we will make a statement about our plans for the new stadium.’

The city council said it was ‘surprised’ by the disclosures. A spokesman said: ‘As far as the council is concerned we are still in discussions. Obviously there are issues at play concerning the building costs, but we are discussing them.’