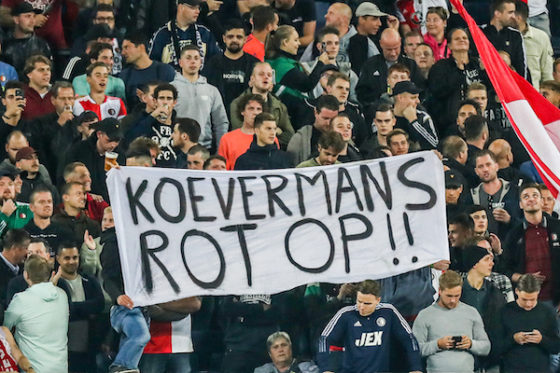 The director of Rotterdam football club Feyenoord has resigned, saying multiple threats made against him are the most important reason for his decision.

Mark Koevermans said a number of recent incidents had led him to ask if every decision he was taking on behalf of the club would have an impact on the safety of his family and himself.

‘It hurts to take this decision but I think it is for the best, even though I know I will miss the club, my colleagues, and many people associated with the club,’ he said. He is the third director of Feyenoord to stand down in five years.

Black day for Feyenoord. Whether you liked Koevermans or not, this will work through in the reputation of the club, which is increasingly taken hostage by a small group of violent fans.

In particular, the club and city’s plans for a new stadium have proved controversial and, according to the AD, talks between city officials and the club also required extra security.

Rotterdam council executive Arjan van Gils said in a reaction to Koeverman’s resignation that it is always a sad day when someone feels forced to quit because of intimidation and threats. ‘I would like to express my appreciation for the way he has worked under intense and difficult circumstances over the past period,’ Van Gils said.

Last month, the windows of Koeverman’s home were smashed and the property was daubed with paint.

This summer, Feyenoord was also forced to act when some fans posted threats against former club captain Steven Berghuis following his transfer to Ajax.

The Dutch football association KNVB said in a reaction that it has already been in touch with the government. ‘This has to stop,’ said Marianne van Leeuwen, the KNVB’s professional football chief. ‘I am more than happy that the government is working with us on quick and firm measures.‘