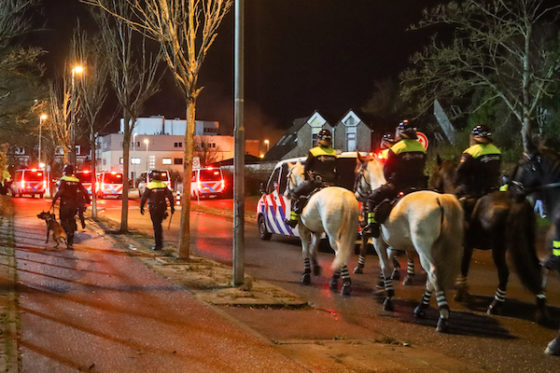 Police made a further 28 arrests at least on Sunday night, in the third night of trouble in towns and cities across the Netherlands.

In Enschede and Groningen, gangs of youths set off fireworks, smashed shop windows and trashed bicycles and there were several arrests. In Roosendaal, rampaging youths set several fires, including one close to a primary school.

In Tilburg, where there were no arrests, groups of youngsters set off fireworks and set fire to waste bins, broadcaster NOS reported. There were also problems again in Stein and Roermond, where at least five arrests were made for drugs offences.

Earlier in the day there were again problems in Rotterdam, and 24 people were arrested after trouble outside the Kuip football stadium. In Leeuwarden too, fireworks were set off outside the Cambuur stadium and riot police were brought in.

Supporters have been banned from live games because of the coronavirus measures.

The NRC said in its analysis of the trouble that the situation is very similar to those in February, when the curfew was introduced.

‘On the first night, there were too few police on duty because they had not predicted the size of the crowd – result, serious violence,’ the paper said. ‘On the second evening, copycat behaviour in other towns and villages, but less violence because there were more police on the ground.’

Public safety expert Marnix Eysink Smeets told the NRC the trouble is down to a combination of factors – anger over the possible introduction of 2G, the ban on football supporters and, on Friday, the announcement that there would be a ban on New Year fireworks.

‘That is a sensitive issue in the neighbourhoods where the troublemakers come from,’ he said.

Nevertheless, the paper said, it is important not to blame all the trouble on the coronavirus protests. In Rotterdam, where 49 people were arrested on Friday night, the troublemakers consisted off those out for a fight and youngsters in hoodies with mopeds, who were behind the curfew riots.

Criminologist Marijke Drogt told the paper that the rioting was a ‘carnival of crime’, carried out by people who simply enjoy it. Fighting with the riot police is the evening escape, she told the paper.