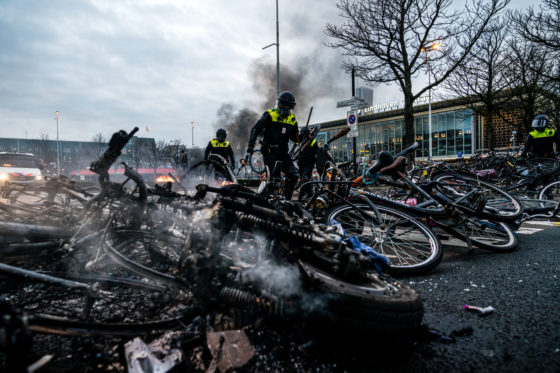 Politicians across the spectrum have condemned the rioting in several Dutch cities and municipalities on the second night of the national curfew – and accused each other of stoking the violence.

In one of the first reactions, GroenLinks leader Jesse Klaver laid the blame at the door of far-right nationalist parties PVV and Forum voor Democratie. ‘This kind of rioting is exactly what happens when parties like PVV and Forum claim that NOS is fake news,’ he said on Twitter. ‘

Klaver was referring to an incident in which a security guard was sprayed in the face with a corrosive chemical as he tried to protect an NOS camera crew filming a mob that was burning down a coronavirus testing facility in Urk, Flevoland.

His tweet triggered a petulant response from PVV leader Geert Wilders, who posted a video of violent scenes in the Schilderswijk area of The Hague with the caption: ‘Those are your supporters, Jesse. Do something!’

Wilders had earlier called on Twitter for the violence to stop in Amsterdam, Eindhoven and Urk. The PVV’s local branch in Urk had been strongly criticised for a tweet posted on Saturday in which it pledged to ‘do everything we can to make sure [the curfew] is not enforced on Urk.’

Forum voor Democratie was also criticised for a tweet in which it promised to ‘continue resisting’ the ‘unacceptable restriction of our freedom’, on what they called ‘the second night on which [prime minister Mark] Rutte has locked up the Netherlands.’

Despite the physical attacks on journalists at the weekend, Forum reacted to the criticism by calling it ‘another batch of fake news by NOS.’ ‘It goes without saying that FVD condemns the use of violence in protests,’ it said in a subsequent tweet.

A few politicians chose the alternative route of focusing on the violence itself. Labour party leader Lilianne Ploumen said: ‘Ignoring the curfew, setting fire to a testing facility, attacking and assaulting a guard and making it impossible for the press to do its work. Those responsible must be caught and punished.’

Klaas Dijkhoff, the leader of the governing party VVD’s team of MPs, who is not seeking re-election, said: ‘To the sad rioting scumbags: wtf are you playing at?!?’

Justice minister Ferd Grapperhaus described the scenes as ‘shocking’ and said police had been right to take a hard line. ‘This has nothing to do with demonstrating against coronavirus measures,’ he said. ‘This is outright criminal behaviour: people deliberately attacking police, riot squads, journalists and other support services.’