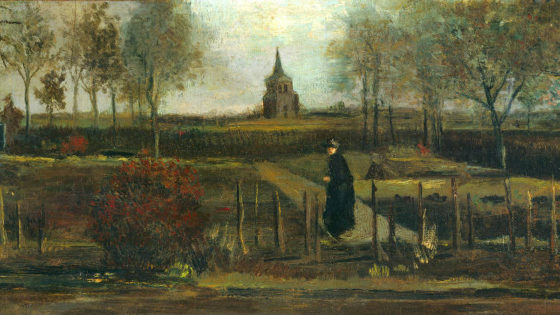 A detail from the stolen painting. Image: Groninger Museum

A man has been sentenced to eight years in prison and to pay compensation of €9 million for two high-profile museum robberies of masterpieces last year.

Nils M, 59, from Baarn, was convicted for the maximum possible sentence on the basis of DNA evidence.

The theft of an early Van Gogh painting from the Singer Museum in Laren at the start of lockdown last year made international headlines. The 1884 painting, The Parsonage Garden at Neunen in Spring, was owned by the Groninger Museum. Later in the year, the Frans Hals painting Two Laughing Boys with a Mug of Beer was stolen from the Museum Hofje van Mevrouw van Aerden in Leerdam.

Both robberies had a similar smash-and-grab method before two suspects rode away on a scooter.

The man, described in Dutch papers only as Nils M and unnamed in court documents, was arrested on the basis of DNA traces found at both crime scenes. He was discovered in possession of firearms and a large quantity of hard drugs and claimed to have no knowledge of the thefts.

Criminal experts, and later the prosecution, speculated that such paintings are sometimes used by criminals in negotiating plea settlements.

Giving the maximum possible sentence, including compensation for part of the €16 million Hals painting that was not covered by insurance, a court in Lelystad found that M had robbed the public of ‘hundreds of years of pleasure’ and stolen part of the nation’s cultural heritage and that he was a ‘hardened, calculating criminal’.

Both paintings are still missing.