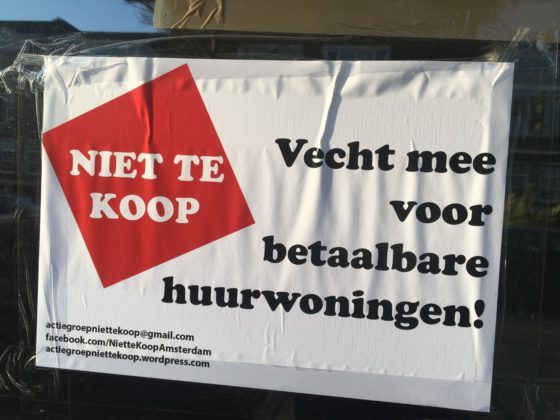 Thousands of people are expected to take part in a demonstration in Amsterdam’s Westerpark this Sunday, calling for a mass movement to force action to solve the housing crisis.

With house prices continuing to soar, a serious shortage of affordable rental accommodation and long waiting lists for social housing, action is needed to make ending the crisis a top priority, the organisers say.

‘People are now realizing that is not their fault if they cannot find a home or pay for one,’ organiser Sander van der Kraan said earlier this week. ‘They are the victims of years of neo-liberal policy.’

For years problems on the housing market have been dismissed as external issues, such as pollution and immigration, Van der Kraan said. ’The problems were all seen as being so big and complex that politicians could absolve themselves of any blame.’

In particular, the organisers say the government should stop the extra tax on housing corporations so they can invest more in building new social housing. Measures should be taken to restrict the role of private investors and rents in the non-rent controlled sector should also be regulated.

A report by ING out on Friday showed that people starting out on the housing ladder are particularly hard hit by the shortage of places to live. ‘They are being forced to rent expensive properties and are delaying their future plans, such as having a family,’ ING spokesman Wim Flikweert told the Telegraaf.

ING surveyed 1,100 home owners and new entrants to the market. One in three said they had been waiting for more than 18 months to find an affordable place to buy. Almost a quarter said finding a new home was a matter of urgency because where they were living was either too expensive or did not meet their needs.

In Amsterdam, for example €1,500 for a small flat in a popular area has come to be considered the norm, even though rents have fallen slightly during the pandemic.

The role of private investors is also being called into question and next year legislation which will stop them buying up cheap and mid-priced homes in certain areas will come into effect.

Local broadcaster RTV Rijnmond said earlier this week that 38% of houses coming on the market in Rotterdam were bought by investors who planned to rent them out rather than live in them.

Amsterdam has already published plans to bring in local rules requiring people to live in a property if they buy it. The city council is also considering buying up stocks of social housing that come up for sale in order to keep rents affordable.

In total, they say that one million new homes need to be built in the Netherlands in the next 10 years to meet demand.


However, a report last month by research group Platform 31 suggested the Netherlands could offset some of the shortage of housing in the short term by making better use of its current housing stock.

Some 40% of dwellings are currently lived in by one person, and the average amount of space is around 65 square metres each – almost 20 square metres more than in Germany or Belgium, the report pointed out.

Have you had problems finding a place to live and would you like to share your story? Email editor@dutchnews.nl.