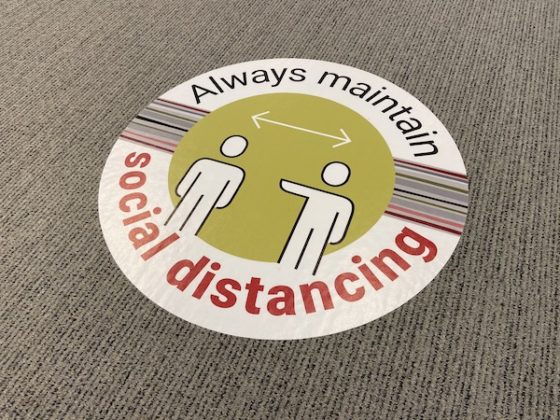 The stickers can now be peeled off. Photo: Brandon Hartley

The hoped-for relief and joy at leaving behind the ‘1.5 metre society’ did not materialise following Tuesday’s press conference. Instead accusations of inconsistency took precedence over ‘being able to put your arm around someone’s shoulder again’.

The Volkskrant gauged reactions among disgruntled club owners whose venues will not be allowed to remain open after midnight, which, owners point out, is when the fun begins. A ‘corona infection peak’ such as the one in June will not occur this time, they say, because many more people have been vaccinated and people will at any rate continue to party at home without a corona pass.

Why the government thinks it is ok for people to ‘dance and drink in noisy, badly ventilated spaces’, until midnight and not after is not altogether clear, the paper said.

The NRC concentrated on caretaker Hugo de Jonge’s harsh words for people who refuse to take the vaccine. ‘I am not the minister of do whatever you like,’ he snapped, pointing out that the group of some 1.8 million people who have not been jabbed are effectively holding the rest of the population hostage.

The question is, however, if his tough stance will make doubters and sceptics decide to get vaccinated, the paper said. Entrenchment is a risk: eight in 10 unvaccinated people think the corona pass is ‘unfair’, the paper says, quoting an I&O survey. Two thirds of those who did get the jabs are fine with the new measure, the survey showed.

The hoped for relief at being able to leave the 1.5 metre society behind did not materialise, Trouw said. Instead frustration over inconsistencies ruled.

Why, for example, can casinos open until 3am while bars must close at midnight?, the paper said.

‘Rutte and De Jonge could think of nothing better than to say that some limits had to be imposed to stop the spread of the virus. They conveniently forgot that when clubs opened in June it was the government’s own ‘Dansen met Jansen’ slogan which caused the peak,’ the paper pointed out.