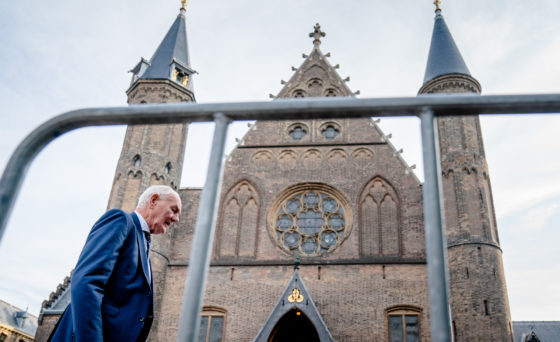 Veteran political fixer Johan Remkes has told the parties in the stalled coalition talks to bury their differences and build a working minority coalition.

The 70-year-old former VVD home affairs minister took over from Labour politician Mariëtte Hamer this week as the talks moved into the cabinet formation stage.

Remkes has given himself a month to try to forge a minority coalition from the right-wing Liberal VVD, progressive Liberal party D66 and the Christian Democrats (CDA), the combination proposed by Hamer in her concluding report.

But he warned he would not stand for parties continuing to rule each other out as potential partners, after VVD and CDA rejected a five-way coalition with two left-wing parties while D66 refused to team up again with the ChristenUnie (CU).

‘If they stick with that attitude I’ll be done with it very quickly,’ Remkes said on Wednesday after meeting the three core parties. On Thursday he will sit down with the leaders of CU, Labour (PvdA) and GroenLinks, the other participants in Hamer’s exploratory talks over the summer.

‘It is up to the parties themselves to come out of this impasse,’ he said. ‘The mutual relationships need to grow.’ He said the talks needed to focus on substance rather than political strategy, ‘because there are urgent problems that are asking for a solution.’

GroenLinks leader Jesse Klaver said his party would not get involved in behind-the-scenes discussions to support a minority cabinet. ‘We are willing to start negotiations for a majority cabinet tomorrow, or even this afternoon,’ he said.

‘But if they decide in their wisdom that it has to be a minority cabinet, they’ll have to agree it among themselves and we’ll see what parliament makes of it.’

VVD leader and caretaker prime minister Mark Rutte rejected a five-party coalition with PvdA and GroenLinks as ‘unstable’, a position supported by finance minister and CDA leader Wopke Hoekstra. Both argued that only one of the parties was needed for a majority cabinet, but their leaders were only prepared to go into government as a duo.

Rutte’s preference for a cabinet with the CU was blocked by D66 leader Sigrid Kaag because of the two parties’ fundamental difference on issues such as euthanasia and abortion rights.

A cabinet of VVD, D66 and CDA would have 72 seats, four short of a majority, meaning either CU, GroenLinks, PvdA or the nationalist right-wing JA21 could supply the votes it needs to get its legislation through the Lower House.

However, Kaag is likely to have reservations about brokering a coalition deal with two conservative parties who have very different positions on issues including migration, Europe and welfare spending.