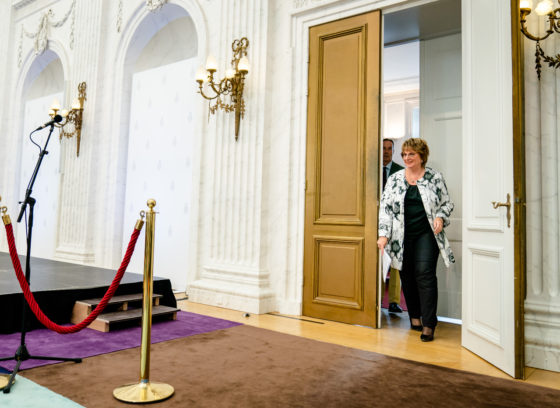 Mariëtte Hamer said she was ‘concerned’ about the trend. Photo: ANP/Bart Maat

The woman charged with identifying a new Dutch cabinet has said she is ‘concerned’ about the growing tendency of parties to rule each other out before negotiations begin.

Mariëtte Hamer said in her concluding report that there was ‘broad agreement’ between the six parties she spoke to about how to tackle the problems in the Netherlands, but intractable personal and political differences had blocked the way.

On Wednesday the talks reached an impasse after the two centre-right parties, VVD and CDA, refused to form a coalition with D66 and the two centre-left parties, PvdA and GroenLinks. Prime minister Mark Rutte said a five-party coalition risked being ‘unstable’.

The progressive-liberal D66, which was in favour of including both PvdA and GroenLinks, had earlier ruled out reforming the previous cabinet with the ChristenUnie because of fundamental differences on medical-ethical issues such as euthanasia and abortion.

Hamer said a minority cabinet of VVD, CDA and D66 was the most credible option. The three parties have 73 out of 150 seats in parliament, although the CDA will lose one of its 19 seats when Pieter Omtzigt, who resigned in June, returns from sick leave this month.

She said efforts to form a majority cabinet had been thwarted by ‘a limited number of winning parties who can pull the cart, a fragmented Lower House and the large number of parties and individuals who have excluded each other.’

‘However understandable their reasons may be, the overall outcome is a situation that will not strengthen people’s trust in politics,’ she said.

The right-wing liberal VVD has named veteran troubleshooter Johan Remkes as its preferred candidate to head the next stage of the negotiations, in which the parties will negotiate a coalition agreement.

Remkes, 70, has said he will combine the role with his current post of governor of Limburg. His CV includes spells as interior affairs minister, king’s commissioner for Noord-Holland and acting mayor of The Hague.

He acquired the nickname ‘Mister Stikstof’ after heading a commission that drew up rules to limit nitrogen emissions in the wake of a Council of State judgment that the Netherlands was breaching European conservation rules.