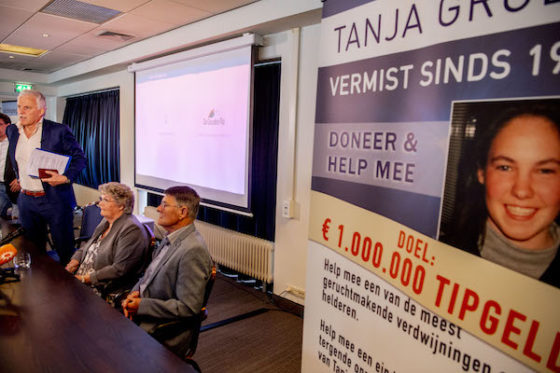 A foundation set up by crime journalist Peter R de Vries to help solve the disappearance of 18-year-old Tanja Groen ,who vanished nearly 30 years ago, has collected €1m via crowdfunding.

Tanja Groen, a first year health sciences student, vanished on August 31, 1993 on her way home from a party at the Circumflex student society in the Maastricht. She left the party around midnight to cycle home to her lodgings in Gronsveld but was not seen again.

A tip off followed up by a police cold case team as recently as 2020 did not turn up any new information and her body has never been found.

De Vries, who was shot last Tuesday moments after leaving at television studio in Amsterdam where he had talked about the case, is chairman of the foundation, and became Tanja Groen’s parents’ only remaining hope of ever solving the case.

It is the highest amount ever to be paid for information leading to the solution of a case in the Netherlands but, according to De Vries, a large amount is the only way to encourage people to come forward and force a breakthrough in the case.

‘This is a dream come true and so significant against the background of what happened to Peter’, board member Simon Vuyk told Nu.nl.

De Vries’ children had also called on the public to donate to the fund. ‘Our father has spent 40 years of his life solving cold cases where families were tortured by not knowing. (..) He had been working on the case day and night for months,’ they said.

They said their father’s medical situation remained unchanged. ‘There are many unknowns, so we can’t say very much about it. We do know he is in good hands and the doctors and nurses are doing all they can.’