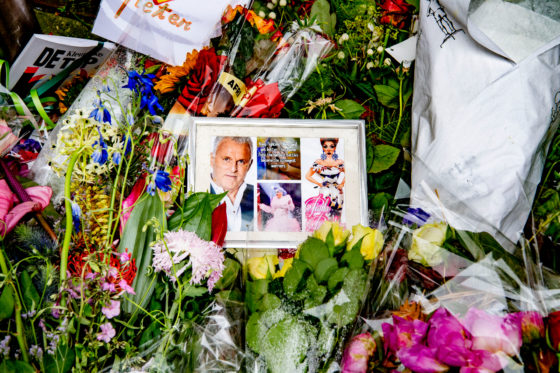 Investigative journalist Peter R. de Vries has died in hospital, nine days after being shot in the street in Amsterdam.

The 64-year-old’s family said they were ‘immeasurably proud, but also inconsolable’ as they confirmed his death in a statement on Thursday.

De Vries was shot in the head from close range in Amsterdam’s Lange Leidsedwarssstraat on July 6, just after leaving a television studio at around 7.30pm.

He was one of the most prominent journalists in the Netherlands, known for his work on high-profile crimes such as the kidnapping of Freddy Heineken in the 1980s and the disappearance of American tourist Natalee Holloway in Aruba in 2005.

“It is almost impossible to comprehend. My thoughts are with his family, his relatives, friends, colleagues, all those close to him and I wish them a lot of strength in this unimaginably difficult moment,” Prime Minister Mark Rutte said in a statement.

The sentiment was echoed around Europe. “Deeply saddened by the news of Peter R. de Vries’ passing. I want to express my condolences to his family and loved ones,” EU Commission president Ursula von der Leyen said.

More recently he had agreed to represent Nabil B., a key witness in a major gangland trial known as the Marengo case. Many commentators said his assassination in broad daylight was similar to other killings that prosecutors say were ordered by the chief suspect in the case, Ridouan Taghi.

His family said: ‘Peter fought to the end, but was unable to win the battle. He died surrounded by the people who loved him. Peter lived by the conviction: “On bended knee is no way to be free”.’

Two men were arrested within an hour of the shooting after being stopped in a car on the A4 motorway. Polish national Kamil E., who recently moved to Gelderland, and Rotterdammer Delano G., who is suspected of being the gunman, appeared in court on Friday.

G’s family told the Telegraaf this week he had become involved with the so-called ‘Mocro’ drug gangs in Nieuwegein, Vianen and Tiel. He is said to be a nephew of Joey W., or Jaouad, another alleged Taghi gang member who is serving 13 years in jail for being a member of a ‘hit squad’.

Taghi, 43, is one of 17 people currently standing trial in Amsterdam accused of ordering six murders and another seven attempted killings between 2015 and 2017. He is also suspected of ordering the assassination of Amsterdam lawyer Derk Wiersum on his doorstep in September 2019.

Wiersum was acting for Nabil B. in the Marengo case, though his murder is not part of the trial. Two men appeared in court earlier this week accused of carrying out the killing.

Earlier today justice minister Ferd Grapperhaus said he had ordered an inquiry into the security arrangements around De Vries, who said two years ago he was on Taghi’s ‘hit list’.

De Vries had refused an offer of personal protection after Wiersum’s death, saying it would make his job impossible as he depended on his contacts in the underworld for information.

Taghi’s lawyer, Inez Weski, has denied that the cases are connected and attacked the media coverage of the shooting of De Vries, insisting there was no evidence her client was involved.