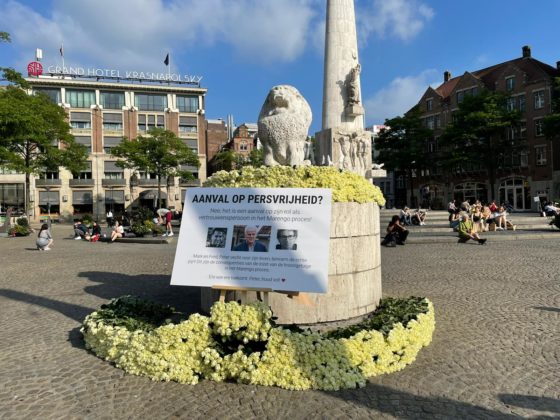 Relatives of one of the two men arrested for shooting crime journalist Peter R de Vries have told the Telegraaf that they have been overcome with shame about his involvement.

Delano G, 21, is suspected of shooting De Vries five times after he appeared on a television talk show last Tuesday. A 35-year-old Polish national is said to have driven the getaway car.

‘No-one knows what went wrong but his parents are horrified and such a murderous attack is no ordinary crime,’ a family member told the Telegraaf. The paper said it was approached by the relative and has verified their identity.

‘This has to stop. It can’t go on like this,’ another relative told the paper. ‘Lives are being ruined, from innocent victims like Peter R de Vries and our own family members. We want to save our family.’

‘Delano liked dancing and rapping and is super sensitive to status and attention,’ the relative said. ‘He had a lot of contacts with the wrong people from Nieuwegein, Vianen and Tiel. They are breeding ground for the big Mocro [Moroccan] gangsters. These lads get asked to put a bag of drugs or cash in a shed… and are gradually drawn in.’

The Financieele Dagblad said in an analysis that the attack on De Vries ‘again showed how deep drugs-related crime has become embedded’ in the Netherlands.

‘Violence and billions of euros are disrupting a society which is not not exactly innocent when it comes to the success of the drugs mafia,’ the paper said.

Delano is said to be a nephew of Jaouad, or Joey W, who comes from Tiel, and is currently serving 13 years in jail for his role in what the Telegraph described as a ‘murder on demand’ service.

Jaouad, or Joey W is said to be linked to Ridouan Taghi, another gangster who is currently on trial with 16 others for a string of murders and other crimes.  De Vries was supporting crown witness Nabil B in that trial.

Meanwhile, police sources have told the NRC that Saturday’s edition of television talk show RTL Boulevard was cancelled because of fears the studio on Amsterdam’s Leidseplein would be attacked by either a rocket launcher or automatic gun fire.

But neither police nor Amsterdam city council would confirm what the ‘serious threats’ made against the show, forcing its weekend cancellation, actually were.  Peter R. de Vries was shot on Tuesday after appearing on the programme.

There have been two other high profile attacks on the media in recent years. In 2018, the Panorama magazine offices were shot at by members of the biker gang Caloh Wagoh using an anti-tank weapon.

And in 2020, two men were jailed for up to 10 years for an attack on the offices of the Telegraaf newspaper in June 2018. The men drove a Volkswagen Caddy van into the facade of the building on Amsterdam’s Basisweg and set fire to it, causing extensive damage.

Judges called the incident ‘a counter-offensive by organised crime aimed at the Telegraaf’ and ‘an attack on the freedom of the press’, although the precise motive was not established at the time.