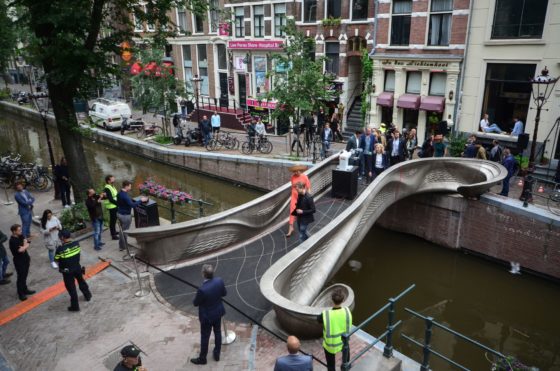 The opening of the MX3D bridge: photo Adriaan de Groot

An innovative 3D bridge printed from steel has been opened in Amsterdam’s red light district.

The MX3D bridge, first proposed in 2015, was opened on Thursday by Dutch queen Máxima and is now open to the public.

On Friday morning, curious Dutch and foreign tourists were taking pictures and walking across the swirling structure, which is clearly constructed in strips and ridged like the shell of a snail.

The project, which involved a list of prestigious partners including the Imperial College London, computing firm Lenovo, The Alan Turing Institute and Arup engineers, is also equipped with special sensors.

These will record all kinds of pedestrian and crowd behaviour to feed a ‘digital twin’ of the bridge, which will help city researchers investigate all kinds of topics from the impact of tourism in the red light district, via the numbers and speed of people crossing, to how the curious structure ages. 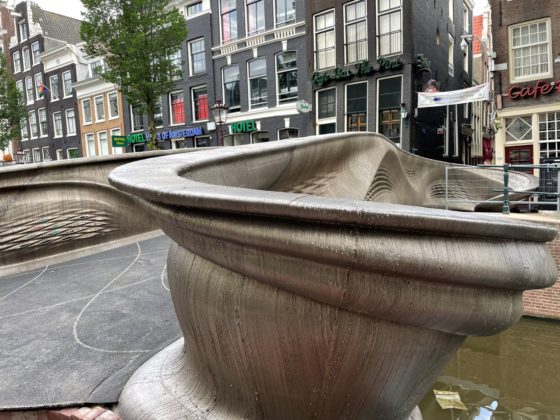 Tim Geurtjens, co-founder of the company MX3D, said in a statement that a crazy idea had become reality. ‘A few years ago, we came up with the idea to use the robotic 3D-metal printers that we developed to print a functional, full size steel bridge. Together with the excitement of this crazy idea also came the realization that there was no way we could pull this off alone.

‘We are very grateful that we had the opportunity to work with some of the top people and businesses in the field of robotics, engineering, welding technique and software development.’

Although printing and assembly of large sections of the bridge began in March 2017, the final placement of the steel structure had to be postponed for almost due years as the canal walls needed to be restored.

The experiment will, according to Stijn Joosten, structural engineer at Arup, help open ‘a world of possibilities for architects, engineers, and designers, who can explore greater form freedom and create new shapes and structures which could not be created without the use of 3D printing.’