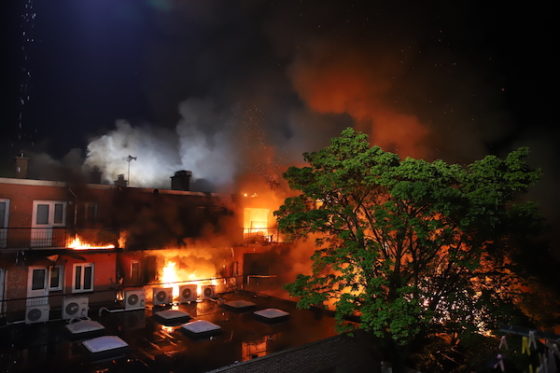 The blaze spread from apartment to apartment. Photo: ANP DISTRICT8

A massive fire which swept through an apartment block in a residential part of The Hague on Thursday morning has rendered 40 households homeless, the fire brigade told local broadcaster Omroep West.

The fire broke out around 3am in one of the apartments in the Schilderswijk district of the city. It spread quickly to other apartments, engulfing them in flames and then reaching a mosque which is part of the complex.

So far no-one is thought to have been injured in the blaze, which by 1pm was still not completely under control.

‘This is my home,’ one man told the broadcaster. ‘I called all my neighbours to go outside, including a pregnant women. Luckily no-one died. That is the most important thing. Possessions are not important, as long as people survive.’

A mosque worker told broadcaster NOS that the building had been seriously damaged and one thousand copies of the Koran had gone up in flames. ‘This really is a big loss,’ he said.

As yet, nothing has been said about a probable cause.