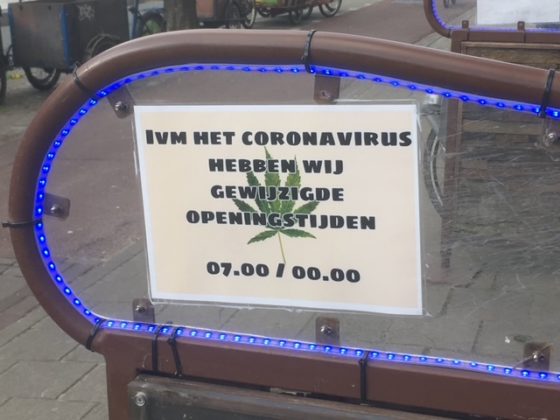 Suggestions that foreign tourists be banned from Amsterdam’s cannabis cafes, or coffee shops, have been greeted with alarm by some experts, who warn that the situation in the capital cannot be compared with other cities.

‘The plan is doomed to fail’ criminologist Ton Nabben told a meeting of city councillors on Tuesday. ‘It will be disastrous for feelings of public safety, particular in alleys and dark corners.’

In January, Amsterdam’s mayor Femke Halsema published a plan to reduce nuisance and crime caused by the soft drugs industry, by enforcing a national law which means only residents can buy from the coffee shops.

But opponents of the restriction say it will lead to more crime and nuisance, as street dealers return and tourists go underground to use drugs.

Drug addition expert Floor van Bakkum told councillors she fears that the under-18s would be able to get hold of cannabis more easily if street dealers returned to the scene. ‘And selling drugs to tourists would be a very easy way into crime for youngsters,’ she said.

Researcher and criminologist  Edward van der Torre said during the meeting that Amsterdam faces a fundamental choice. Politicians, he said, ‘have to make it clear that people who live in England or Germany should not come here to buy drugs,’ he said. ‘You have to be united in this. And it is going to take more energy than you think.’

Halsema plans to finalise her plans later this year, and has pledged to work out ways of tackling street dealers. The city council itself is divided on the issue.

In recent months, calls have increased from politicians, businesses, tourist bodies and residents of the Dutch capital to cut down on budget tourism. Halsema is also looking into the option of moving much of the city’s window prostitution to a purpose built Eros centre.

A survey by the city’s statistics department O&S in February showed that a third of the tourists questioned said that if they were no longer allowed into coffee shops, they would visit Amsterdam less frequently – and 11% would not come at all.

One third of the British tourists said that coffee shops were their main reason to come to Amsterdam.