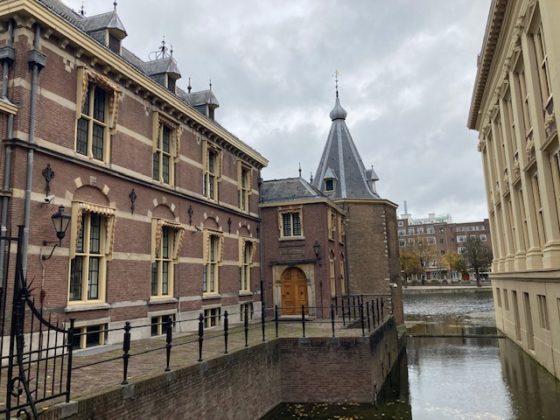 Who will occupy the prime minister’s ‘torentje’ office? Photo: DutchNews.nl

A number of prominent VVD members have gone public with their support for beleaguered caretaker prime minister Mark Rutte, who is facing increasing isolation in The Hague after ‘forgetting’ he had suggested moving a critical MP to a ‘new role’.

Former ministers in Rutte-led governments, including Henk Kamp, Annemarie Jorritsma and Fred Teeven have all given their public backing to the prime minister, and there is no-one within the party who is publicly doubting his leadership, the NRC reported.

After all, they point out the VVD won the election with 34 seats and ‘you do not dump a leader who made his party the biggest again,’ the NRC said.

‘I have the feeling that these games in The Hague are damaging the Netherlands’ stability,’ said Groningen councilor David Jan Meijer. ‘The CDA and D66 have strengthened their negotiating positions. Congratulations. But now the country needs to be run again, and only Rutte can do that.’

Rutte himself has spoken of his determination to carry on. ‘It would appear that Rutte has recovered quickly from Thursday’s marathon debate,’ the NRC said.

Storm in a teacup: the Dutch are no good at political scandals

However, the decision by Gert-Jan Segers, leader of the minor coalition party ChristenUnie, to say that he would not join another VVD coalition led by Rutte has complicated the process of putting together a new coalition.

Party leaders are due to discuss the way forward with parliamentary chairwoman Khadija Arib on Tuesday, when they are also likely to select an ‘informateur’ to sound out the parties and suggest a tentative coalition.

Much depends on the position of D66, which is now the second biggest party in parliament. D66 leader Sigrid Kaag has indicated she has had enough of Rutte but has not said definitively that she will not work with him.

However, a coalition without the VVD and led by Kaag would require at least seven parties to form a majority and would appear to be a non-starter.

The idea of a minority cabinet has also been mooted. ‘It may be impossible to put together a majority in our present situation,’ Leiden University professor Wim Voermans told the Volkskrant. ‘Then a minority cabinet is technically a possibility, maybe even necessary. But the chances that such a coalition will last for four years are very slim.’

Former VVD MP Ton Elias told a television talk show that it is still unclear if the other big parties really no longer wish to work with Rutte. ‘They are taking their positions and trying to get as much as possible out of them,’ he said. ‘In the end it will be a VVD, D66 and CDA cabinet, with another party.’

Newcomer and FvD spin-off JA21 has been suggested as a possible number four, given their weight in the upper house of parliament.

Meanwhile an opinion poll by Maurice de Hond suggests the row over Peter Omtzigt has cost the VVD support, suggesting the party would win 28 rather than 34 seats if there was an election tomorrow.

No single party, however, appears likely to benefit.

Those votes, the poll of 4,000 voters shows, would be spread evenly between D66, pro-European Volt, the far right FvD and JA21, the pro-animal PvdD and farmers party BBB.