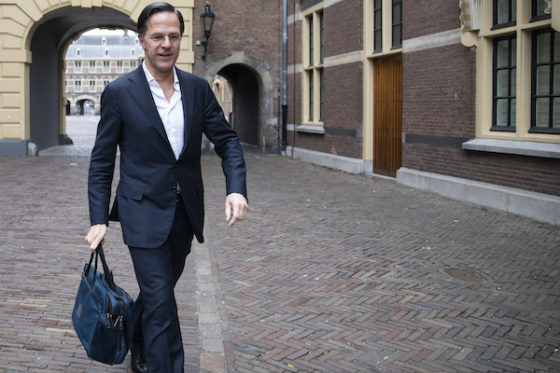 Dutch prime minister Mark Rutte is battered and bruised following Thursday’s vote of no confidence but he is still standing. ‘I will continue as prime minister’,’ he said, but how realistic is that?  What the papers say.

Rutte’s role behind the scenes, his repeated denials to have spoken about CDA MP Pieter Omtzigt’s position and his belated ‘wrongly recollected’ admission make it doubtful he will be asked again to lead the cabinet, Trouw said.

The big questions that will have to be answered after the Easter break will be how to reboot the formation process, and if Rutte will be representing the VVD. The paper concluded that that seems to be Rutte’s intention at least. ‘But even if he does his authority has been tarnished,’ the paper said.

Parliamentary history has been written on the back of the events, the NRC pointed out. By having a debate on the failed attempts to sound out potential coalition partners, for which no official rules exist, MPs are setting the boundaries for future feeler talks. This includes demanding to see the notes of the conversations and by holding the scouts personally responsible.

‘MPs are limiting the wriggle room for Rutte and have created a precedent for future formations,’ the NRC said.

The Volkskrant said in its analysis that although Mark Rutte seemed to be on the way out, he had successfully played ‘the personal card’.

In a rare display of temper, Rutte had hit the lectern and said: ‘ Yes, mistakes have been made but in this country we usually forgive each other. I have led this country through an economic crisis, a refugee crisis and a pandemic. (..) I have shown I can handle complex problems. Have I ever pulled one over on you? Ask yourselves. I think I have a reputation as a reliable partner.’

Despite many harsh words the newly appointed MPs seemed to realise that to show a prime minister who recently enjoyed the support of so many voters the door, caretaker though he is, would be a bridge too far,’ the paper said.

‘A fourth cabinet under the leadership of Mark Rutte is a long way off,’ the AD said in its analysis. Integrity and Rutte don’t go together in the yes of many non-VVD voters, the paper said. In the ten years of being prime minister Rutte survived many a crisis ‘but a slight air of craftiness always remained.

‘Loss of memory, broken promises, withheld information, documents that only appear after MPs and journalists press for them…’ the paper enumerated Rutte’s failings. ‘And now this!’

According to the Telegraaf a cabinet formation so marred by controversy as this one predicts a very small chance of success for a resulting cabinet. ‘It will be a ‘vechtkabinet’’, with parties continually at each other’s throats, the paper said.

The Financieele Dagblad foresees the ‘end of Mark Rutte’s hegemony’ pointing out the seriousness of the matter by singling out the ‘usually amenable’ SGP which supported the motion of no confidence against Mark Rutte and called it ‘a historical step in the existence of the country’s oldest party’.