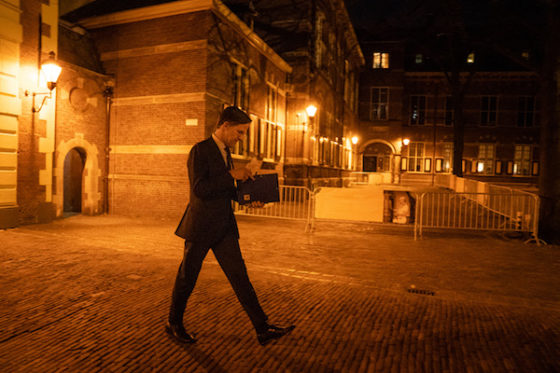 Dutch prime minister Mark Rutte has narrowly survived a late night vote of no confidence after being accused of lying over suggestions that a CDA MP who is highly critical of the government be moved ‘elsewhere’.

The complete opposition, including the fundamentalist SGP, voted for the motion, but this was not enough to force the caretaker prime minister to stand down. A second motion of censure against Rutte, for damaging public trust in government, was supported by almost everyone.

‘I have heard the message and taken it to heart,’ Rutte said, shortly after the vote. He said he would do his utmost to get back the confidence of parliament, and that at no point during the chaos had he considered resigning.

The motion of censure was drawn up by Sigrid Kaag, leader of Rutte’s coalition partner D66, which was the big winner in last month’s general election, plus Wopke Hoekstra, leader of the CDA. Kaag told MPs that her confidence in Rutte had been badly shaken by Rutte’s actions.

Thursday’s debate was called to discuss the shambolic start to the coalition negotiations following the March 17 general election.

The chaos began after Kajsa Ollongren, one of two people selected to start off the talks, accidentally leaked a damning memo as she dashed from the parliament building early on Friday morning after testing positive for coronavirus.

The note, drawn up on the basis of talks with party leaders, suggested the position of Christian Democrat MP Pieter Omtzigt was due to be discussed at a later meeting with Rutte and Kaag.

Ollongren, a D66 politician who served as home affairs minister in Rutte’s last cabinet, and her fellow negotiator, Annemarie Jorritsma of the VVD, resigned shortly after the contents of the memo were made public. As the hunt began to find out who had raised Omtzigt’s position in the first place, Rutte was among the politicians denying any involvement.

New ‘scouts’ were appointed to restart the coalition talks and pledged MPs would be provided with all the notes taken about the formation talks so far.

Those documents, released on Thursday, showed that it was Rutte himself who had brought up the position of Omtzigt after all.

The prime minister told MPs at the start of the debate he had been reminded in an early morning phone call that it was him who mentioned Omtzigt’s name in talks with Ollongren and Jorristma. He declined to say who had warned him and went on to repeat that he had not been lying.

Having survived the vote of no confidence, Rutte can now in theory continue to act as caretaker prime minister while the cabinet negotiations continue.

And what the ramifications of the debate, which ended around 3am, are for the coalition talks remains unclear. MPs also voted to appoint a single negotiator, who is both respected and at a distance from parliament, to restart the process.

#Rutte survived, again, but is significantly wounded. There seems little chance at stable Rutte IV, given lack of majority in Senate.

Will VVD stick with Rutte? Will they risk new elections? Their internal opinion polls will probably give the answer to these related questions.

Some commentators say Rutte’s position is so damaged that he will come under pressure from within the VVD to stand down. Others say Kaag has lost status for not backing the no confidence motion.

Kaag said herself after the debate that it should ‘not be taken as read’ that Rutte will take the lead in the continuation of the formation process.