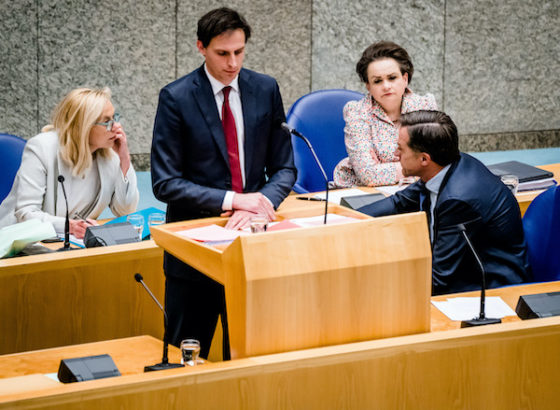 Prime minister Mark Rutte has told parliament he is ‘not proud’ of the comments he made about critical MPs in cabinet meetings, during a 15 hour debate which ended in the early hours of Friday morning.

Parliament was debating the minutes of one meeting in 2019 in which MPs were criticised for asking probing questions about the child benefit tax office scandal.

The minutes were published on Monday after RTL said they showed ministers had tried to make CDA parliamentarian Pieter Omtzigt, who was one of the government’s main critics over the scandal, ‘see sense’.

Thousands of families were wrongly accused of trying to defraud the childcare benefits system between 2012 and 2017, leaving some financially ruined.

But the scandal was only fully exposed by the work of a small number of MPs, who persistently questioned ministers and called for total transparency.

Thursday’s debate, which ended with the adoption of a GroenLinks and PvdA motion calling for a new ‘administrative culture’ in The Hague, was about ‘apologies, resolutions to do better and reflection’, broadcaster NOS said in its coverage.

Ministers pledged to do better when it comes to providing information to parliament. And social affairs minister Wouter Koolmees said he had only been ‘blowing off steam’ when he criticized Omtzigt and VVD MP Helma Lodders about who, according to the minutes, he said were working together with the Socialists against the government.

And finance minister Wopke Hoekstra said he had no intention of silencing Omtzigt by ‘trying to make him see sense’. Instead, Hoekstra said, he simply wanted to draw the problems the tax office was having to his attention.

‘It was a therapeutic debate, a sort of cleansing ritual,’ NOS political correspondent Wilma Borgman said. ‘It was a plaster on the political wounds.’

In particular, the tone of GroenLinks and the Labour party was less critical than during the debate of April 1, when Rutte was attacked personally by almost every party, she said.

‘The controversial minutes were painful for the entire cabinet, not just Mark Rutte,’ the Volkskrant pointed out. ‘So all the government parties rallied round behind the prime minister who had ‘done nothing improper.’

Earlier in the evening, an alliance of the two far right parties, farmers party BBB, BIJ1 and Denk, tried to force through a second vote of no confidence in the caretaker cabinet, but failed to win broader support.

Remarkable! Motion of no confidence in Dutch parliament, which is co-sponsored by leaders of two far right parties and two “migrant parties” (as well as close-to-far right farmers’ party). 🇳🇱 pic.twitter.com/tiU2DD1Jcc

In particular, the fact that GroenLinks and the PvdA did not support the no confidence motion, showed that they are ‘more or less dictating their conditions for taking part in a new cabinet,’ the Financieele Dagblad said in its analysis.

In all the debate, the paper said, appeared to clear the way for the coalition formations talks to continue.

Meanwhile, tax minister Alexandra van Huffelen told MPs the scandal has not yet been fully resolved and that less than half the parents due for compensation of €30,000 before May 1 would have their money because of the complexity of the issues.

Earlier, she had pledged everyone would be fully compensated by that date.  In total, 25,600 parents have registered for compensation and 11,000 will have the money before the start of next month, she said.

This group includes a ‘large number’ who won’t be paid out anything, because, for example, they don’t actually have any children or earn more than they should have to claim the benefit in the first place.