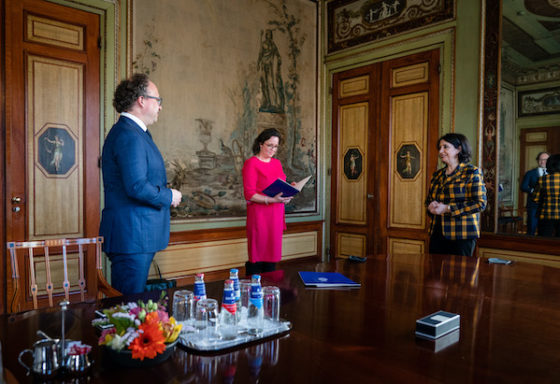 Talks on forming a new coalition government will restart on Friday following Thursday’s debacle involving a positive coronavirus test for Kajsa Ollongren and a photograph of her discussion notes.

Ollongren and Annemarie Jorritsma stood down after the faux pas, with Tamara van Ark and Wouter Koolmees taking over the role of finding out what coalition has the best chance of succeeding.

In the meantime, prime minister Mark Rutte has told reporters that neither he or D66 leader Sigrid Kaag had discussed the position of highly popular CDA MP Pieter Omtzigt with the outgoing coalition scouts – whose name was listed next to ‘another function’ in Ollongren’s document.

Insiders, however, say the damage has been done, particularly with regard to Omtzigt who has been a strong critic of the outgoing government’s strategy. And according to the Telegraaf, the CDA is meeting on Friday to discuss its response to the crisis. On Thursday, leader Wopke Hoekstra described the photographed notes as ‘bizarre’.

On Friday, a majority of MPs, including MPs from the VVD and D66, called for a parliamentary debate on the notes with the two former scouts, who were appointed to their jobs by parliament.

As yet, it is unclear when that debate will take place.

Questions have also been asked about why Ollongren was at the parliamentary complex while waiting for the results of her coronavirus test. Like other ministers, she had been tested after junior economic affairs minister Mona Keijzer was found to have coronavirus last week.

On social media people wanted to know why Ollongren was not in quarantine waiting for the results. At the same time, television images of ministers holding face to face meetings, while the government urges everyone to work from home, have also raised questions.

Sticking to the rules

According to the NRC, Ollongren was sticking to the public health institute rules, which are broken down into three categories: household members, close contacts and other contacts.

The third category applies to people who have been talking to someone who is positive for coronavirus for more than 15 minutes but at a 1.5 metre distance, and that applies to everyone who held meetings with Keijzer on Friday, the paper said.

The RIVM recommends people have a test after five days, but not that they stay home until they have had the results.

Nevertheless, several party leaders who held talks with Ollongren over the past few days have gone into voluntary self isolation, including Lilianne Ploumen (PvdA), Sylvana Simons (BIJ1) and Gert-Jan Segers (ChristenUnie.

‘People expect that their leaders pay attention to the health of those around them in times of crisis,’ VU University psychology professor Mark van Vugt told the NRC. ‘That gives a clear sign of how important a politician considers the issue to be.’

Ministers have decided they will only meet online for the time being.