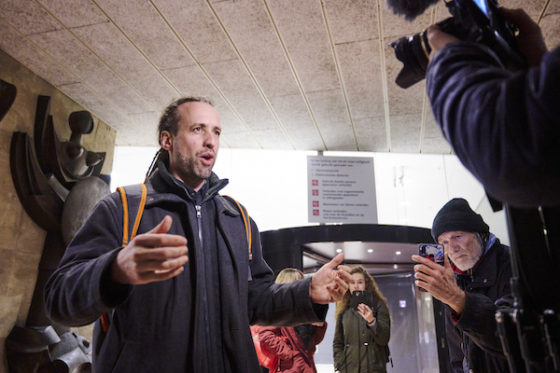 Police chiefs have said that congratulations delivered to anti-coronavirus measures campaigners after they won a court case on the curfew were ‘inappropriate’ and should not have been made.

Rotterdam police have admitted congratulating Willem Engel, founder of the Viruswaarheid group, for his victory, which effectively ruled the curfew illegal. This was a ‘neutral action’ and part of ‘building connections’, a spokesman said.

However, national police chiefs said that it is the role of the police ‘to respect legal rulings’ and that ‘congratulations are out of place’.

Engel said in court on Tuesday that he had been congratulated by Rotterdam, The Hague and Amsterdam police on his win.

Amsterdam police have not yet commented on the claim, and The Hague’s police chief has said the congratulations offered to Engel were made by a police officer who was not speaking on behalf of the force.

Meanwhile, Engel, a dreadlocked dance teacher, told the NRC in an interview that his battle is about more than coronavirus.

Technology giants and the World Health Organisation are using coronavirus to keep the world’s population under control, he said. He is calling for a ‘velvet revolution’ in which ‘Rutte and his team’ are arrested and charged and, ultimately ‘parliament is abolished’ and replaced by referenda.

However, Engel told the paper, ‘I remain realistic’ and recognises change will only happen when ‘the people rise up’. Until then, his first priority, he said, is that ‘the whole thing collapses’.

Engel comes from a family with a long history of legal action against the state, the paper says. His father was a notorious slum landlord in Rotterdam before selling the properties after a long legal battle and the family was also owner of the notorious Fort Oranje trailer park.

During the interview, Engel refered to the police as ‘brown shirts’ and ‘criminals’, the paper said. It also pointed out that he had launched a website featuring photos of police officers he considered to have used violence during a Viruswaarheid demonstration and urged his supporters to find their names.