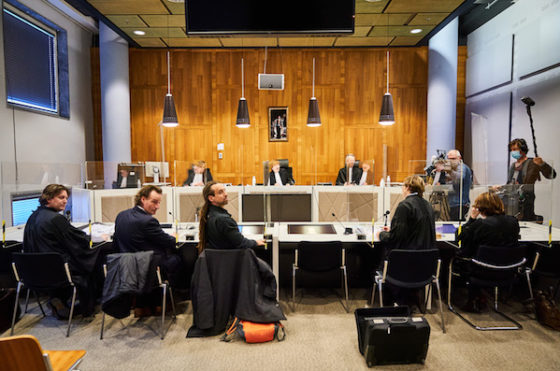 Opponents of the curfew (right) during the hearing. Photo: Phil Nijhuis ANP

The curfew will remain in force until Friday when the appeal court will consider its merits at a formal hearing, judges in The Hague ruled on Tuesday evening.

The verdict, given shortly before 9pm, came after hours of legal wrangling, during which opponents of the curfew attempted to have the judges dismissed for bias.

On Tuesday morning, The Hague district court ruled the curfew was illegal because of its impact on freedom of movement. The government, however, appealed immediately, and asked an emergency court to keep the curfew in place until appeal court judges have had the chance to look at the case in more detail. That hearing will take place on Friday.

The case was brought by Viruswaarheid, a campaign group which opposes the coronavirus regulations and has fought several earlier cases trying to have restrictions removed.

Government advisor Jaap van Dissel, who chairs the Outbreak Management Team, said while the court was deciding on its verdict that it is crucial to keep the curfew.

The situation in the Netherlands is currently ‘fragile’ he said. The introduction of the curfew and the reduction in the number of visitors to private homes to one in 24 hours is having an impact on the infection rate, he said.

‘The effect may seem small but we are talking about exponential growth,’ he said. ‘It is stopping us from having to deal with hundreds more cases.’

Prime minister Mark Rutte earlier appealed to the Dutch to stick to the 9pm curfew, while the legal situation is clarified. ‘We remain extremely concerned about the ‘English’ variant and the curfew was introduced to make sure that the infection rate does not go up again,’ Rutte said. ‘We really need the curfew’.

The national police said earlier that they would continue to monitor the situation and would intervene even if the court ruled the curfew should be suspended.

‘Hanging around on the street in a group or having a party is not allowed, whatever the ruling,’ a spokesman said. ‘We will keep a close eye on groups or people who are too close together.’