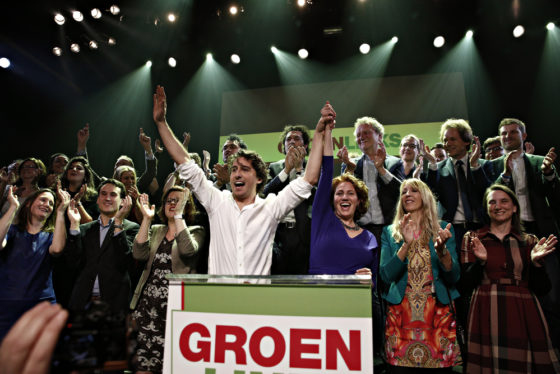 GroenLinks leader Jesse Klaver has urged other left-wing parties to form a pre-election pact to ensure they take part in the next cabinet.

The party unveiled a new campaign poster with the slogan ‘more Lilian, Lilianne, Sigrid and Jesse’, referring to the leaders of the Socialist, Labour (PvdA) and D66 parties. Klaver also published an essay titled ‘Keerpunt 21’ – Turning Point 21 – referring to the joint manifesto in 1972 published by Labour, D66 and the Radical Party.

‘It’s highly unusual to be so transparent during the campaign about your strategy for the cabinet formation,’ said Klaver. ‘It’s also risky, but because it’s so crucial for the future of the Netherlands I want there to be no misunderstanding.’

Klaver has repeatedly spoken of creating a ‘left block’ as a counterweight to the centre-right block that formed the basis of the last cabinet – which included the progressive-liberal D66. But the chances of a formal alliance appear to be receding.

Labour leader Ploumen has said she is open to the idea of working with other parties on the left but does not want to make a commitment before the election. D66 leader Kaag is also against the idea of electoral pacts, while Mariijnissen was put off by Klaver’s efforts to bring D66 on board. ‘It was D66 who blocked rent cuts and the abolition of deductibles in healthcare,’ she told the Volkskrant recently.

GroenLinks dropped out of the coalition talks in 2017 citing irreconcilable differences with the right-wing liberal VVD, the Christian Democrats and D66 on the issue of accommodating asylum seekers outside Europe.