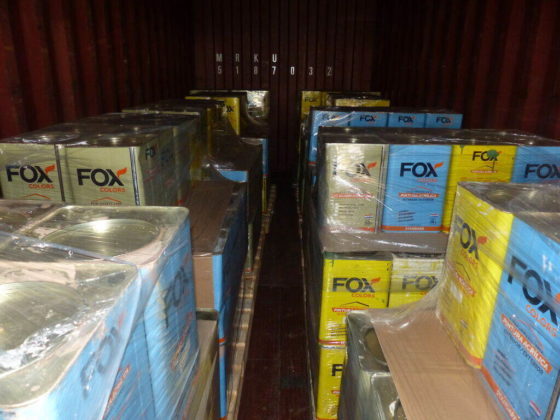 Police in Hamburg and Antwerp have seized 23 tonnes of cocaine destined for the Netherlands in the past 10 days, and one person named in the documentation for both shipments has been arrested.

The haul is an ‘absolute record’, the Dutch public prosecution department said on Wednesday.

The first consignment, totalling 16.1 tonnes, had been hidden in tins of wall plaster from Paraguay. Hamburg port officials found it after a tip off from the Netherlands.

The paperwork accompanying the plaster led to a 28-year-old Dutch national who, it transpired, was also involved in a second shipment of pineapple, squid, wood and mackerel from Panama to Antwerp.

Those containers were scanned on February 20 and found to contain 7.2 tonnes of cocaine.

Earlier on Wednesday it emerged police and other investigators had seized a consignment of 1.5 tonnes of heroin packed in a container of Himalayan salt which arrived at Rotterdam port from Pakistan.

The haul was made on the basis of information supplied by the National Crime Agency in Britain. In total, five people were arrested following a raid on a property in Etten-Leur two weeks ago.

The haul is the biggest single consignment of heroin ever seized in the Netherlands. No further information, including the eventual destination of the drugs, is being given in the ‘interests of the investigation’, the department said.